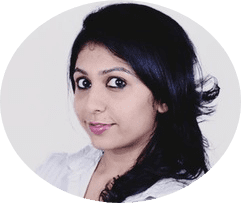 The tech giants, also known as “Big Tech” – Microsoft, Facebook, Amazon, Apple, and Alphabet, heavily recruit MBA graduates with robust knowledge in technology. Besides, every year since 2010, 20,000 new tech-related jobs have been created in the US alone, and due to the shortage of Tech workers with relevant skills, many business schools are incorporating tech-inspired MBA curriculum (e.g., STEM MBA programs).

Moreover, the lack of skilled tech workers tells us the scope of opportunity for MBA graduates.

A few of the top tech companies to work for in 2020 are Facebook, LinkedIn, Amazon, eBay, Apple, Cisco, Google, and Microsoft, according to Vault Technology rankings.

But how do employees of these top technology companies rank their firms? Also, which are the highest paying tech companies, and what skills are required to pursue a career in Tech? 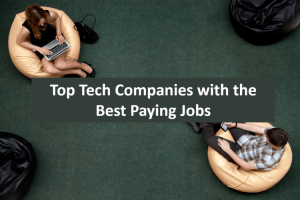 In this article, we analyze the top tech companies to work for in 2020, based on various parameters such as the number of MBA graduates hired, compensation, and job satisfaction. The article also covers the skills required to pursue a career in Technology.

Top Tech Companies to Work for in 2020

To evaluate the top tech companies, we have taken rankings from PayScale Report based on the average salary, job satisfaction, job meaning, and job stress. Also, Vault’s Technology ranking is taken into consideration where the classification is on executive ratings in categories such as benefits, salary, quality of life, career advancement, and overall satisfaction.

Here is the list of Top tech companies to work for in 2020:

The technology firms are known for offering perks like onsite gyms, doctors, stock options, etc. According to the PayScale report on Top Tech Company’s salaries, Facebook employers report the highest median salary of $116,800, followed by LinkedIn ($110,800), and Google ($106,900).

The following table represents the Top Tech companies to work for, after taking their average compensation and work culture into account:

For the above data, we can say the highest paying technology companies are Facebook, Google, Microsoft, and LinkedIn. Apple and Amazon have been the Big tech companies offer comparatively less salary. However, mid-career salaries, as well as job satisfaction, are high for big Tech. 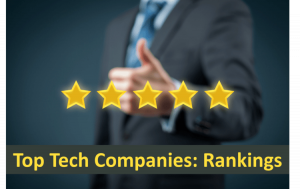 The ranking for Tech companies are divided into three Tech industry segments:

The following table represents the ranking of the top tech companies based on benefits, career advancement, salary, quality of life, and overall satisfaction:

From the above ranking, we can say the best technology companies include Big Tech. HP, Dell Inc., Cisco, and Intel ranks in the top five hardware and equipment companies. On the other hand, Oracle, Salesforce, Sap American, and Intuit Inc. makes the cuts for the best software and computer services companies. 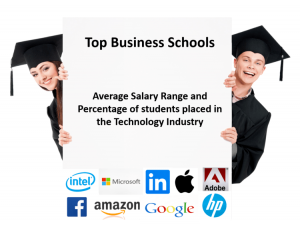 The average salary range for the top business schools in the Technology industry is between $ 54,989 – $ 2,00,000. The following table contains the employment and salary data for Best Tech MBA programs in 2019:

Top Tech companies that hire the majority of MBA graduates

The following table contains the number of hires made by tech companies at some top business schools in the U.S.

Why work in the Tech Industry? 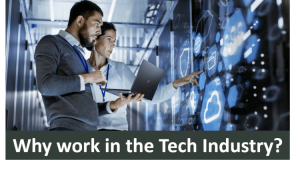 The global information technology industry is $5.2 trillion (2020), with the largest tech market in the world. The most significant tech market is in the United States (32%).

As of 20th January 2020, companies such as Apple, Microsoft, Alphabet Inc., Amazon, Facebook, Alibaba.com, and Tencent are ranked amongst the top 10 valuable companies –  and they’re all tech powerhouses. Apple is the highest valued public company in Tech as of January 2020.

A similar report pointed out that Alphabet is the largest firm to join the small group of companies with market caps higher than $1 trillion, making the tech sector the highest valued in the public market.

According to the Top MBA article, for every year since 2010, 20,000 new tech-related jobs have been created in the US alone, and within the next year, 100,000 new data-related jobs will be created in the EU. And that not all. There are more alarming statistics which indicate 10.7 million tech workers in FinTech and 4.3 million digital workers in high-tech and telecommunications, will be missing by 2030. This could lead to a loss of around one trillion dollars if all the tech jobs are not fulfilled.

The growing demand of Tech workers in addition to the rise of artificial intelligence (AI), robotics, and FinTech in the last few years has led to an increased demand for MBA graduates with robust knowledge in technology.

Thus, the Tech industry is a lucrative career path for MBA graduates. 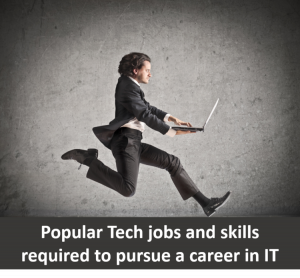 Between 2016 till mid-2019, US employers were only able to fill six of every ten open tech jobs, signaling a considerable technology talent deficit. Moreover, a survey done by Udemy states that 50% of company development and learning leaders’ top priority is to train workers on technical skills in 2020.

With an increased demand for workers with advanced tech skills, many companies are putting more resources into hiring, recruiting, and nurturing the right talent to remain in the global competition.

Thus, employees willing to put time into developing tech skills may have the upper hand in landing some of the most in-demand roles.

But what skill sets are necessary to thrive in the IT field?

According to the LinkedIn report, the need for workers to interpret data sets is becoming more crucial. Thus, jobs involving data science skills have been ranked number #1 for the most promising careers in the US. Also, with the world moving towards a digital future, employers are looking for candidates whose skill sets reflect the shift.

Thus, candidates with these skills are more likely to get high- in-demand tech roles.

Here is a list of the Tech jobs with Skills required and median base salary:

The following table represents the various types of Tech skills required in 2020:

Here are a few more related articles you may like:

Who are the big 5 tech companies?

The Big Five tech giants are – Facebook, Apple, Amazon, Microsoft, and Google. They have a combined market capitalization of over $4 trillion.

What is the average salary range for the top business school graduates in the Technology industry?

Which are the Best tech MBA programs?

Some of the top Tech MBA programs are – Foster School of business, Stanford GSB, Tepper School of Business, Berkeley Haas, UCLA Anderson, and Kellogg.
Read here to know about what makes these schools unique for careers in the tech industry.

What is the salary of an MBA graduate?

Which is the best software services company?

Microsoft corporation is ranked number 1 as per the Vault’s technology ranking.
Read this article to know the best hardware and internet companies.