Wharton, one of the most selective of all business schools had an acceptance rate of 19.2% and a yield rate of 67.1% for 2020 admissions. A high GMAT score, an impressive profile, and how well one aces the interviews are all contributing factors towards ensuring one’s admission to Wharton. However, once a good GMAT score is obtained, the job is still not over, and you must start focusing on essays, letters of recommendation, and other requirements of the application process.

With such a high competition, presenting your application with a high GMAT score becomes essential. This article speaks about one big filtering criterion for Wharton – the GMAT score. GMAT holds a 22% weightage in your application and is the first step towards securing admission from your dream business school.

So, what is a good GMAT score for Wharton?

With thorough trend analysis, we can certainly figure out a good range in which one’s GMAT score should belong, to ensure a higher chance of getting an interview call from Wharton and eventually getting through.

In order to figure this out, we will analyze data from credible sources and base our evaluation on past trends and numbers.

Here’s a summary of the average GMAT scores of the incoming class of Wharton MBA from 2014 to 2018.

To find out what is a good GMAT score, you’d want to refer to a 5-step process of arriving at the answer explained in one of our previous articles.

However, this article far from being just a superficial analysis of data. It is rather an attempt to evaluate and scrutinize past trends to bring to you a deeper insight for figuring out a good GMAT score for Wharton. Let’s take a closer look at data of actual students who were invited for an interview and candidates who finally made it to the coveted list.

We’ll also look at the GMAT scores of applicants who were waitlisted by the Wharton admissions committee to get a comprehensive view and to be able to conclude what is a good GMAT score for Wharton MBA program.

The Wharton decision tracker page on gmatclub is where applicants post their MBA application status of different business schools. This data has been collated for candidates who have applied for admission to Wharton full-time MBA class of 2021. 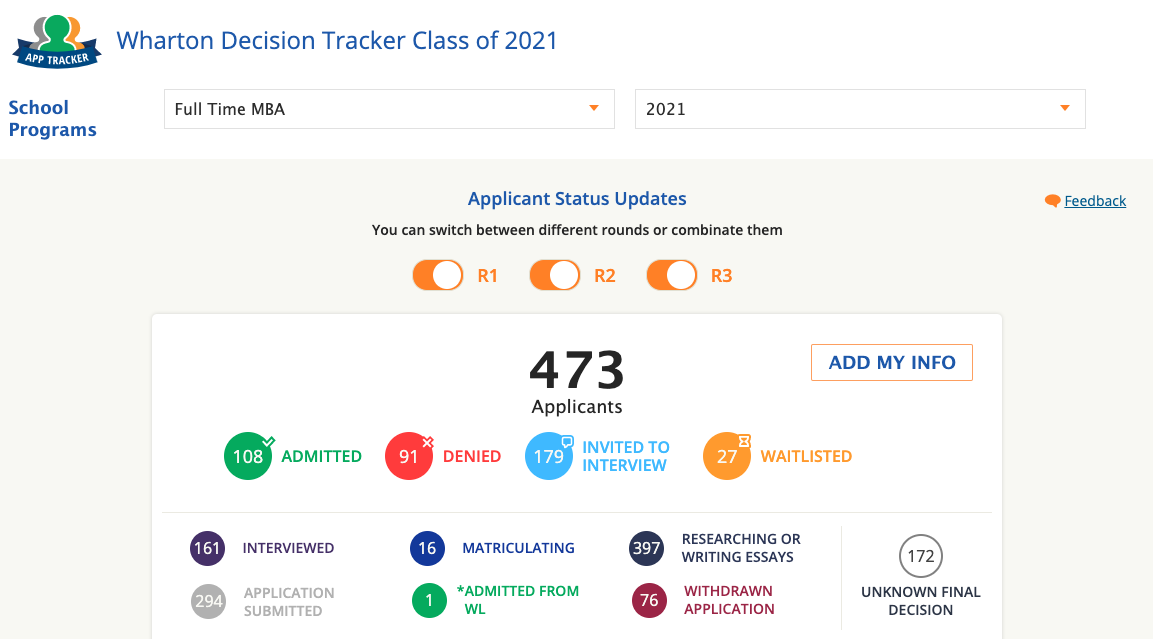 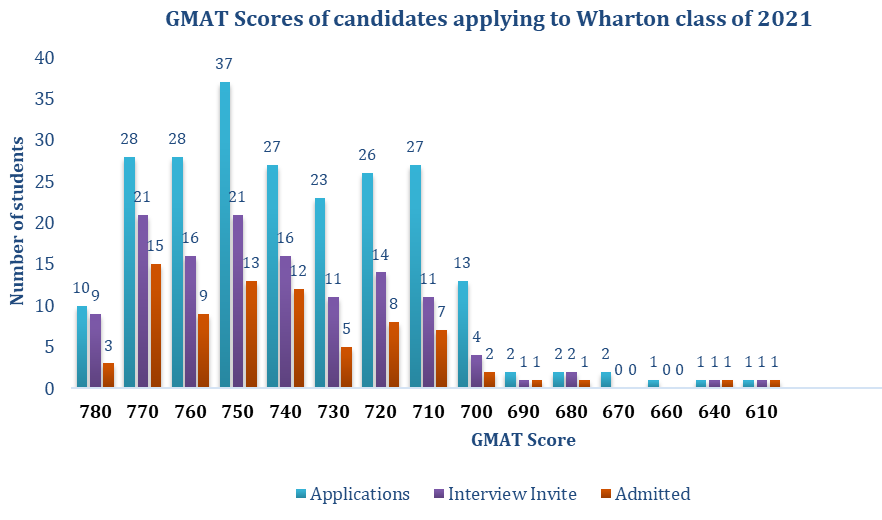 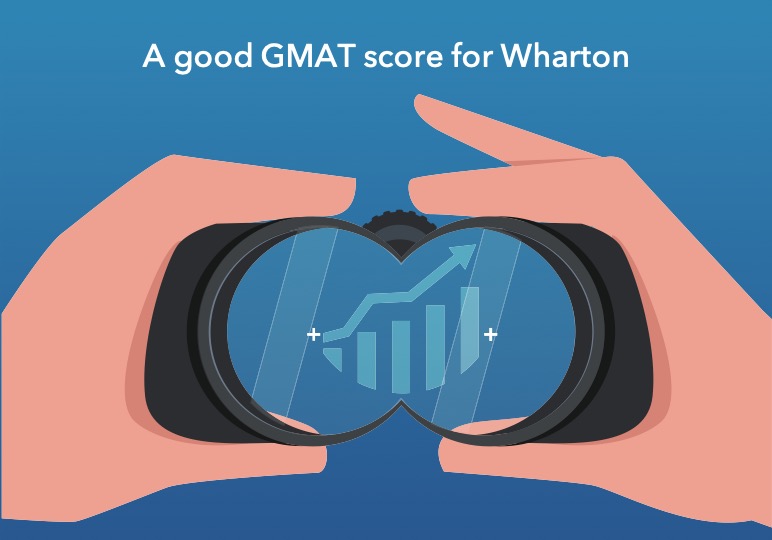 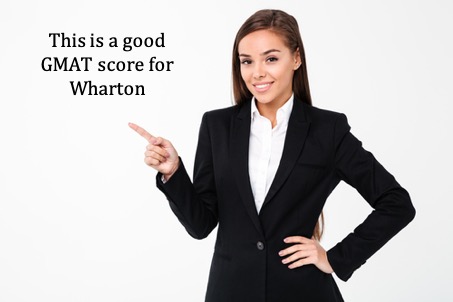 We can infer that a good GMAT score for Wharton ranges from 720 to 770. A score of 770 or more remarkably increases the chances of an applicant getting an interview call from Wharton.

However, as we can see only 3 out of 9 applicants with a score of 780 received the final admit, which signifies that the profile of candidates has a big role to play when it comes to securing admissions at Wharton.

The fact that a good GMAT score for Wharton falls in a wide range (710 to 770), with the conversion to interview ratio not varying much, also supports the importance of other important parameters of the admission process.

Here are 10 ways you can boost your MBA profile

While we have already looked at the scores of candidates who received an admission, let’s also take a closer look at data from waitlisted candidates:

However, none of the waitlisted candidates got the final admission call. But we can see that no one below a score of 720 was even waitlisted. For the batch of 2020, the cut-off for waitlisting candidates was 710.

What is a good GMAT score for Wharton 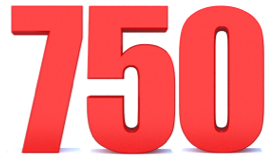 A good GMAT score for Wharton is what can take you from the large applicant pool to interview stage. While a score of 710 to 720 can help you make the cut, a score of 750 and above is a safe bet and good enough for you to start gearing up seriously for the next round by focussing on requirements such as essays, letters of recommendations, resume, etc.

Here are 2 of our students who received an admit from the Wharton School. Click on the images to read their success stories: 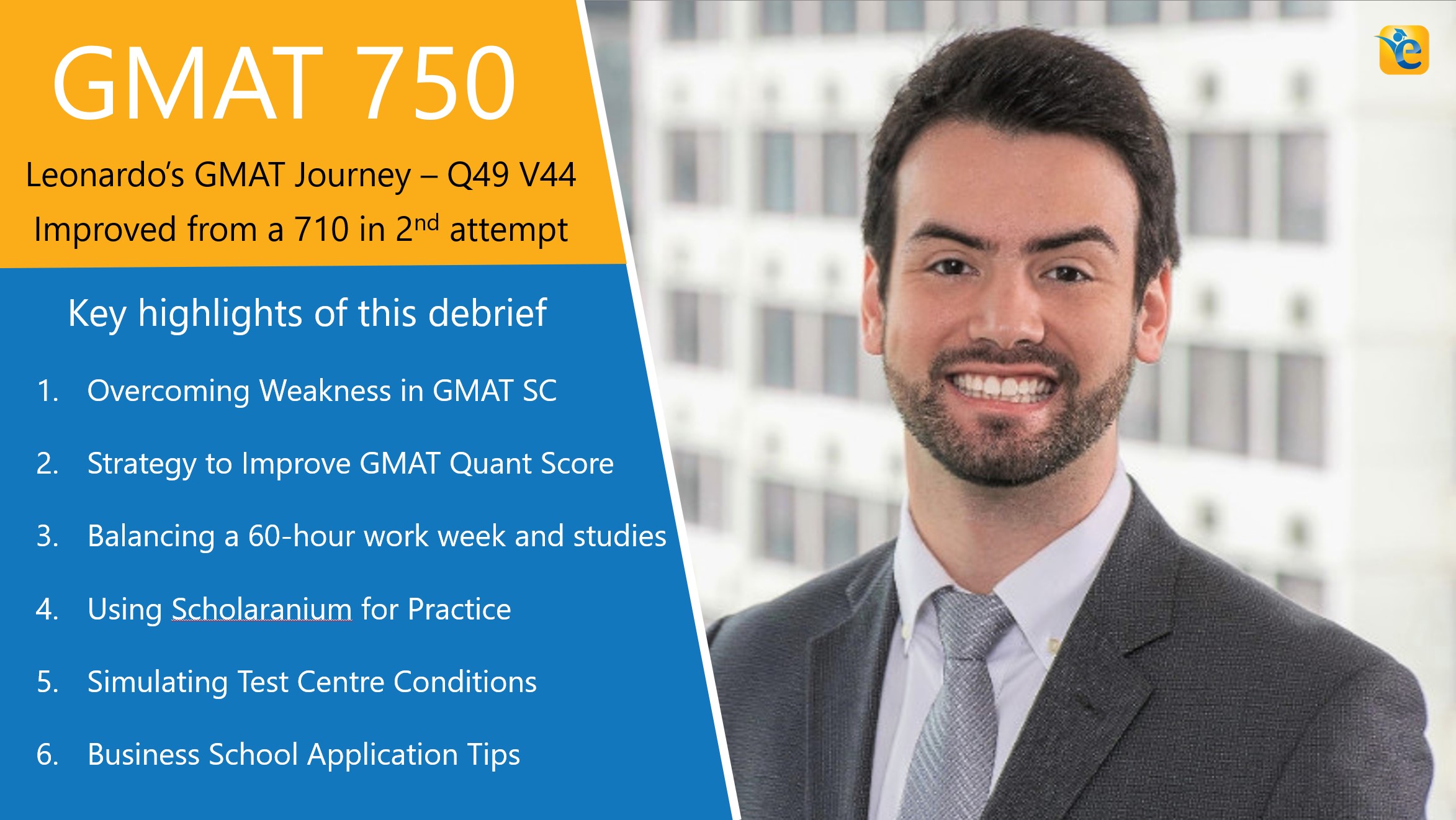 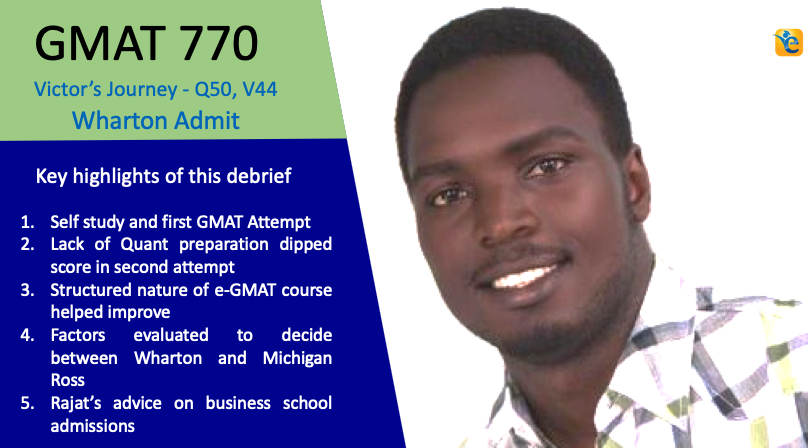 If you want to try out the e-GMAT course that helped Leonardo and Victor score a 750 and 770 respectively, sign up for our Free Trial.

What is a good GMAT score for Indians applying to Wharton

While the highly competitive pool of Indian applicants fights it through some of the best B-schools in the world, at Wharton apart from having a good GMAT score, a great profile can make a huge difference. Given below are the details of GMAT scores of Indian applicants who applied to Wharton for admission to the incoming class of 2021. 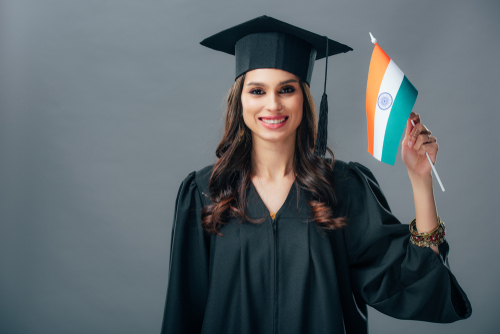 This goes to show that to be on a safer side it’s important to score 760 and higher if you belong to the Indian applicant pool. 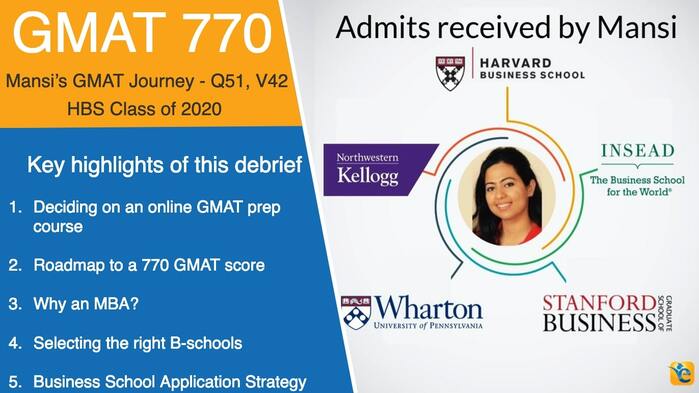