GMAT preparation is not just about learning and applying concepts. It is about a constant struggle with fear of failure, anxiety, hopelessness and all those negative emotions which creep into your mind to convince you that you cannot ace the GMAT. It is at these times that we yearn for inspiration. We tend to search for those people who were once in the same situation and still went on to ace the GMAT. “What did they do in this situation?”, is one common question that we ask. Reading their GMAT success stories give us hope and precise information on how to prepare for GMAT.

Hence, for all of you feeling bogged down right now, here are a few success stories to rejuvenate and inspire you to ace the GMAT. In this article, we have classified different GMAT success stories according to the following categories- 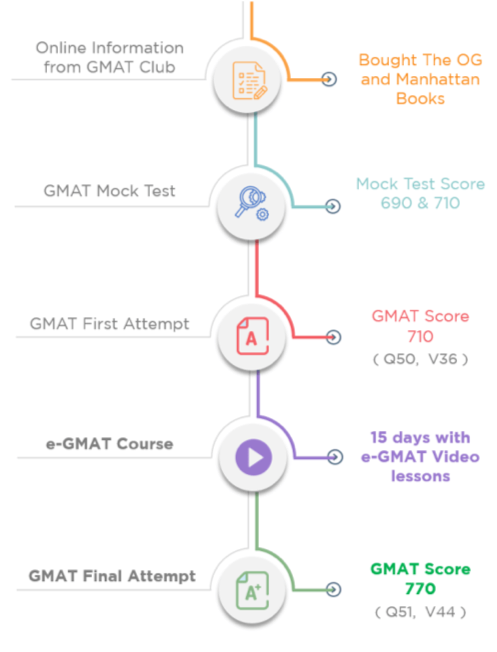 His Story –You find inspiration in unexpected places. Anuj, found his inspiration from a taxi driver, pursuing an undergraduate degree at the age of 35. So, he decided to pursue an MBA and started preparing for the GMAT.

Despite a 60+ hours work week, he scored a 770 in his second attempt. To get to such a high score as a working professional with a very hectic schedule is what makes this a special story. He got an admit from Duke’s Fuqua School of Business.

His Story – He scored 690 on his first attempt. However, being an Indian Engineer, which is a highly competitive pool, he didn’t receive an interview call from any of his target Business Schools. He didn’t get bogged down. He prepared again, and this time he scored a 740, with just 1 month of preparation, while managing a hectic work schedule.

His Story – His ‘never settle for less than your worth’ attitude and determination paid off handsomely when he achieved his dream GMAT score of 760. He did this while working a 12+ hour per day job. He followed a consistent approach and practice schedule to get a good GMAT score 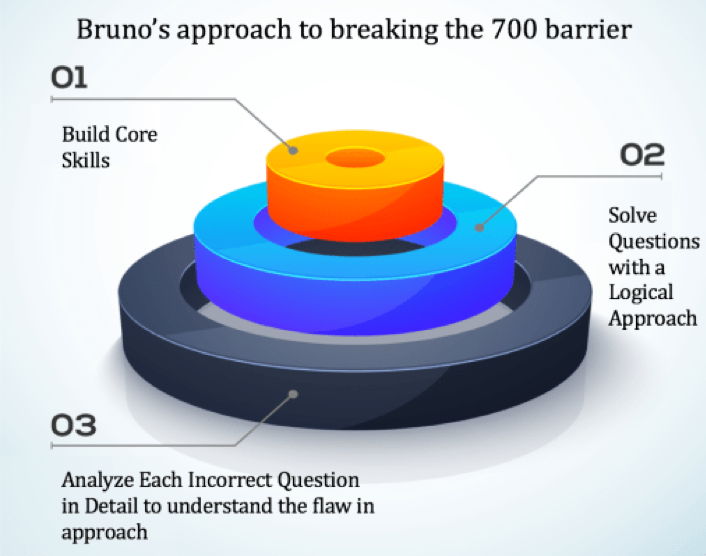 His Story – Bruno took a one month break from work to focus on GMAT preparation full time. He took his first mock and scored an abysmal 540. A month later he scored 730 on the GMAT. His story is one of diligence and a will to continually improve.

His Story – His story tells how a methodical and focused approach can create stellar results in a short period of time. He scored 560 (Q48, V27) in his first mock. Disappointed by this score he went on to score 760 (Q50, V42) on the actual GMAT 20 days later. 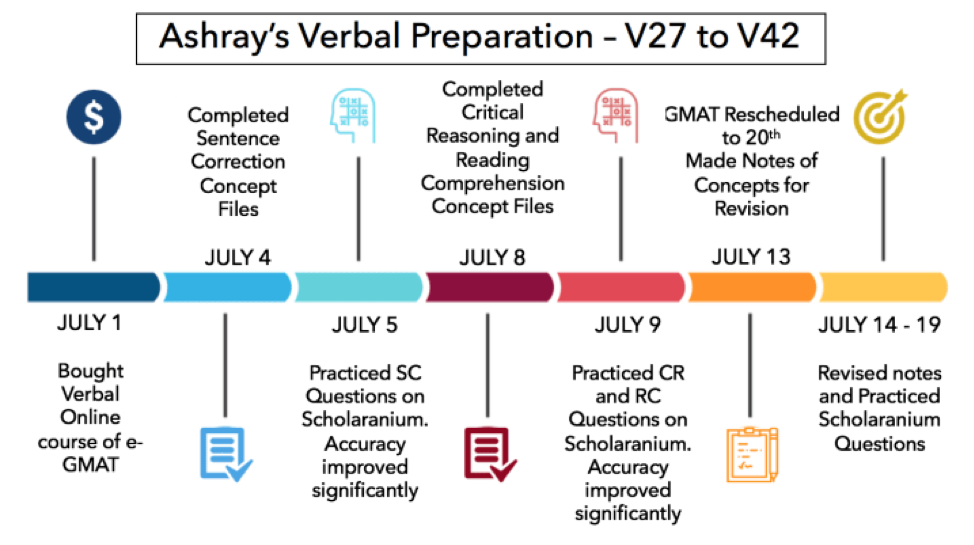 Her Story – She is a perfect example of how a well-crafted study plan can help you ace the GMAT in less time. Rhea improved her score from 620 to 760 in her second attempt with 40 days of preparation. 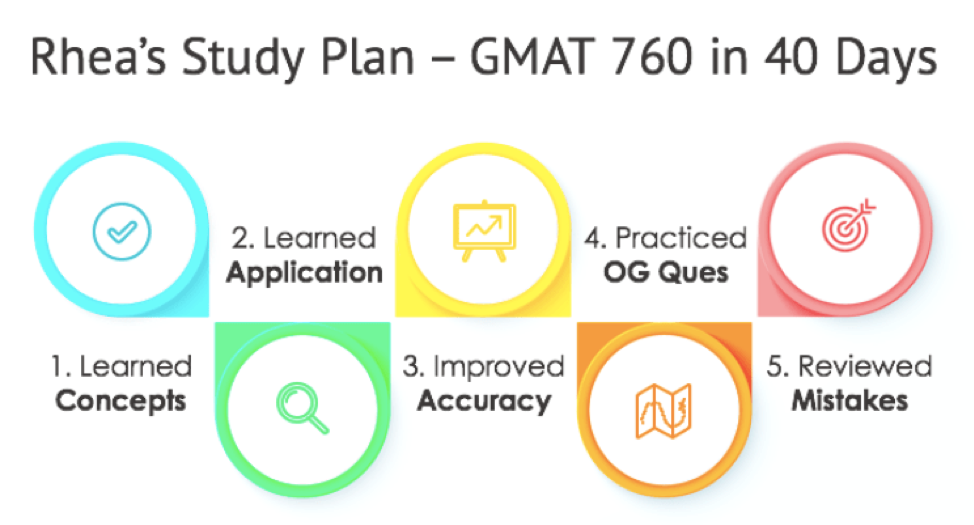 His story is that of dedication and relentless pursuit of a goal. Deciding on Wharton as his dream Business School after a visit, he pushed himself and scored a 710 in his first attempt and got an admit from the Wharton School.

Her Story – She was never keen on taking the GMAT because she thought it was too difficult for her. Moreover, she struggled in Quant. She went on to score a 760 in her first attempt.

What makes her story special are her Quant and Verbal Scores. She scored Q48 (67 percentile) and V46 (99 percentile). Her story proves that you don’t have to be extremely good in Quant to score 750+ on the GMAT.

PS – She got married during her preparation.

His Story – A big misconception among many GMAT aspirants is that native speakers are strong in Verbal. GMAT verbal is more about logic than vocabulary or grammar. Adam improved his score by 210 points from 490 to 700, leveraging the Verbal Live Prep course. 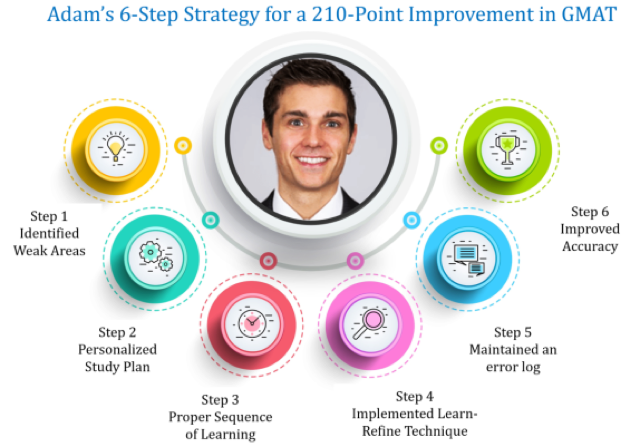 Her Story – She managed to score 750 (Q50 V42) in her first attempt with just 3 months of preparation while balancing her work commitments. She did that by following an effective study plan.

If you’re a working professional looking for a study plan that meets your needs, be sure to check out our comprehensive article on it, Study Plan for Working Professionals.

Her Story – She took the GMAT 5 times and improved from 550 to 740. What makes her story truly inspirational is that she received an admit from 4 business schools including Kellogg School of Management and scholarships worth $180,000.

His Story – He improved his GMAT score by a commendable 230 points with sheer perseverance and determination. He scored 700 on his fourth attempt which only goes to prove that with the right attitude you can reach your target score irrespective of the starting point. 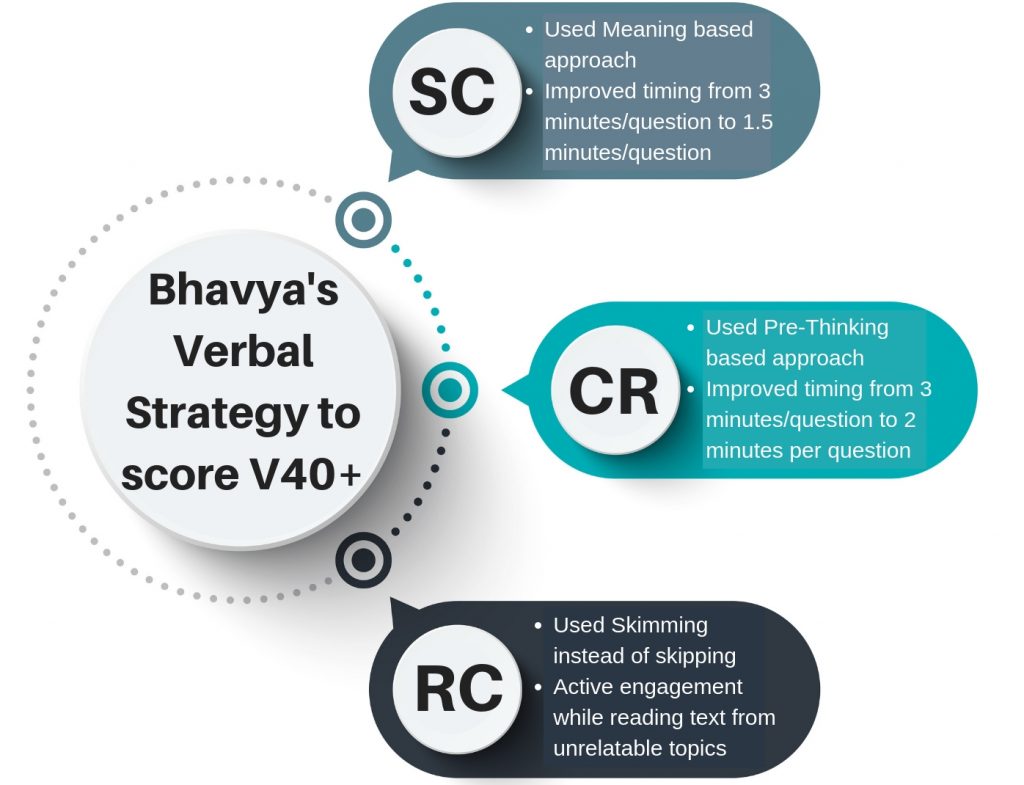 Her Story – Improved by 160 Points from her first attempt by following the approaches taught in the e-GMAT course and developing a sound test-taking strategy! She scored a 730 in her third attempt by overcoming crippling test-taking anxiety. 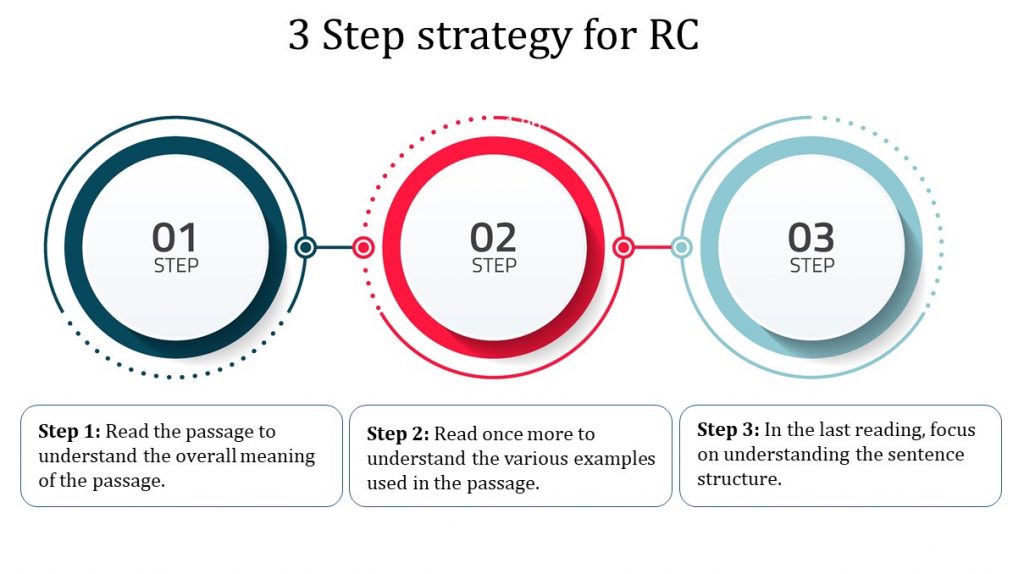 Her Story – Improved her GMAT score by 100 points with less than 3 months of preparation. She credits her success to using a verbal based test-taking strategy and following a structured way of learning. She scored a 740 in the GMAT (Q51 V39)

His Story – He realized early on during his GMAT preparation that low accuracy and speed in the GMAT are an outcome of low ability. He solely focused on identifying weaknesses and developing an understanding of the correct application of concepts. The result is an outstanding 99% tile score (760) in the GMAT. 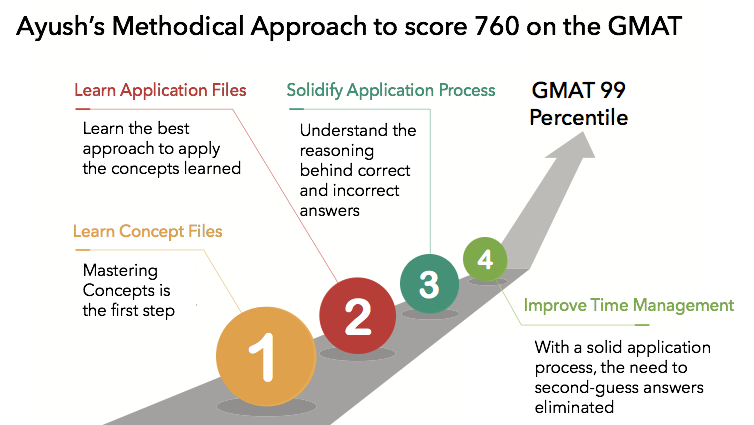 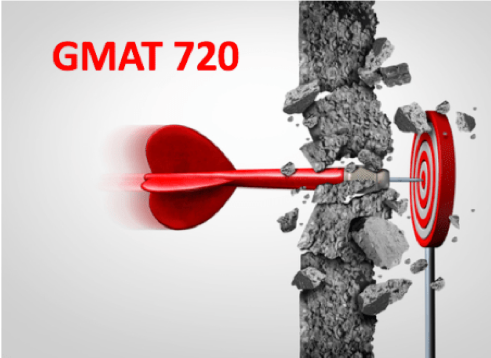 Her Story – Raising a baby is the hardest job in the world. Imagine, preparing for the GMAT while raising a 6-month-old baby and that too after you just moved to an entirely new country. Jacqueline overcame these odds to score a 720 on the GMAT.

Mayank, father of a 6-year old and a working professional who was out of touch with studies for 10 years scored 730 in his first GMAT attempt. He achieved this remarkable feat with just 3 months of preparation.

These are some inspirational GMAT success stories for you to continue working confidently on your GMAT preparation. Take your first step to ace the GMAT and start with your free trial with 25+ Concept Files, 300+ Practice Questions and 7 Free Webinars conducted by e-GMAT.