Bhavya improved her GMAT score from 570 to 730 (V41) with a verbal based test strategy in 3 months. Despite her failure in the first two attempts, she did not deter, and went on to achieve her target score! She credits her GMAT score to test day “Verbal Magic” and using the meaning-based approach in SC, pre-thinking based approach in CR, and strategically skimming through RC passages to understand the role of each paragraph.

Learn more about her preparation plan and the strategies she used to improve as she shares her tips on how to score a V41 in GMAT.

Rajat: Congratulations, tell us how it feels on scoring a 730 on the GMAT?

Thank you, Rajat. It feels great to score a 730 on the GMAT! The surprising thing is that in mock tests, I was scoring in the V38-V40 range. Never was I able to break the V40 barrier. But on D-Day, I was able to score a V41. I credit this to doing amazingly well in the verbal section. I am aware that there may be a 10-20 point difference between your mock test and your GMAT score, however for me scoring more than I expected was indeed a surprise.

Don’t leave anything for the last day of your exam – Read this checklist and be prepared beforehand!

Rajat: Quite an exciting journey from scoring a 570 in your first attempt to 730 in your 3rd attempt. Tell us how you prepared for your 1st attempt?

I started my preparation for the GMAT by using the Official Guide which my friends had purchased. Since I am an avid reader and have a good reading speed, I thought I would deal with the RC section later.

For SC, I revised my grammar concepts from Wren and Martin, and I thought that should be enough to ace SC. Then I moved to CR on which I spent about 1-2 weeks. Then I moved on to prepare for RC. However, I got a shocking score of 530 in a mock test just 3 weeks before my actual GMAT. I thought that since the GMAT is easy and I am fairly good at Quant if I managed a decent score in verbal, I would be able to score between 650-700. But that strategy did not work out and I ended up scoring a 570.

I learned that for the GMAT, just revising concepts and not focusing on devising and perfecting a test-taking strategy will yield poor results. That is when I came across the success story of another student who improved from 530-730 in her second attempt. This was when I decided to join e-GMAT to understand if such an improvement is possible. 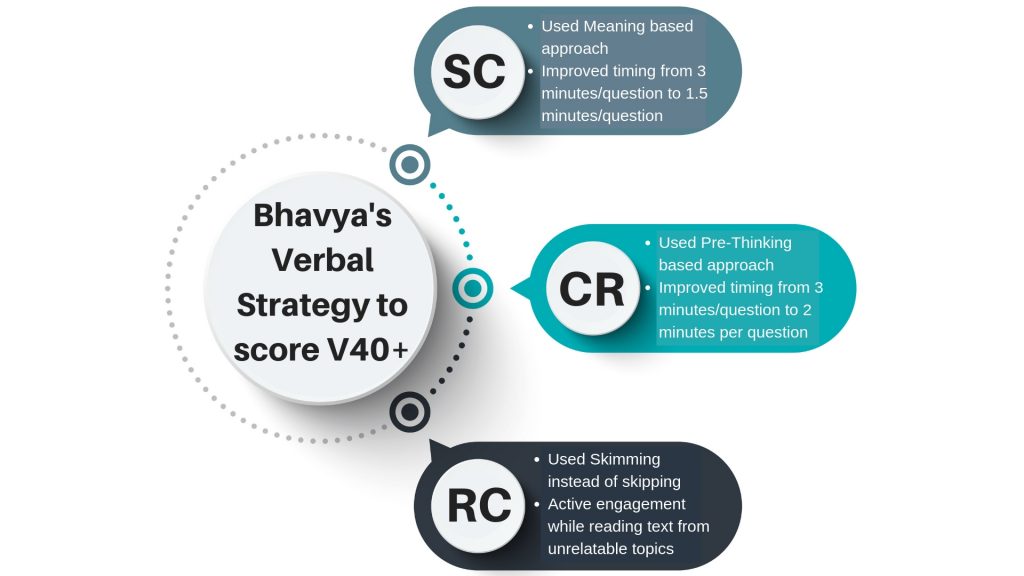 If you want to try out the e-GMAT course that helped Bhavya make the jump of 160 points from 570 to 730, sign up for our Free Trial. We can also help you with a personalized study plan and give you access to quality online content to prepare. Write to us at acethegmat@e-gmat.com. We are the most reviewed GMAT prep company on GMATClub with more than 1950 reviews (as on Sep 7, 2020).

Rajat: How did you start your verbal preparation using the e-GMAT course?

I started with SC where I focused on applying and using the meaning-based approach to answer questions. I read sentences with the intention of understanding meaning, even though this may take longer than expected in the test.

My strategy before e-GMAT for SC:

The above strategy took me 3 minutes to solve even the easy questions. This was one of the reasons for bad time management on the test. However, by following the e-GMAT’s meaning-based approach, I was able to improve my timing to 1 min – 1 minute and 30 seconds. I was able to turn SC from my weakness to my strength.

Struggling with your time management? Learn useful timing strategies for the GMAT here.

CR was my strength, however, in CR questions, the timing was still a major issue. Instead of spending 2 minutes on average, I was spending 3 minutes on each question. By using the pre-thinking approach, I was able to improve my performance on not only the assumption questions but also on the strengthen and weaken type questions.

In RC, however, I used to skip reading the whole passage. I would just read the first and the last sentence of each paragraph. Sometimes, when the passage was from an unrelatable topic and due to the timing pressure, I marked answers randomly instead of reading the passage. This was a major mistake on my part and one of the reasons why I scored poorly on Verbal.

However, using the e-GMAT approach, I focused on being actively engaged while reading the passage. Instead of skipping I started skimming. I paid attention to understanding the author’s tone and opinion. This helped me internalize the content and separate the critical pieces of information from the details. Thus, with this approach, I was able to master Reading Comprehension.

Rajat: Tell us about your second attempt? What went wrong?

The major reason for my poor performance in the 2nd attempt was the lack of a proper test-taking strategy. I feared taking mock tests, thinking that if I performed well, I will become overconfident, or will feel demotivated in case of poor performance. This left me with no other choice but to devise my strategy on test day. I was sure of my concepts and application, however, since I didn’t take mock tests or sectional tests, on exam day I faced anxiety issues. I attempted a GMAT Prep mock test 3 weeks before my test and scored a 630. I was taken aback by the score and was not able to identify where I lacked in my preparation. Due to anxiety on test day, I was only able to manage a 600 on the GMAT. That’s when I realized that I need to overcome my anxiety to hit my target score in GMAT.

In the last leg of your GMAT preparation? Learn the best strategies for a high GMAT score in the last 25 days.

Rajat: What made you try a third time and what did you do different this time?

After my last attempt, I almost gave up on my hope of acing the GMAT. However, I read a success story in which a person improved the GMAT score to a 740 in the 5th or 6th attempt. This gave me the push I needed to attempt the GMAT again. This time after revising my concepts, I spent an equal amount of time on practice and taking sectional and mock tests. During my practice, I solved around:

I also devised my test-taking strategy. Further, by implementing and refining it by applying it in mock tests, I could see an improvement and thus, my confidence increased manifold. I improved from 600 to 650 then to 700, and in my final mock, I scored a 710. The test taking strategy helped me master my approach to questions. I also learned to let go of unsolvable questions, and not spend more than 2 minutes on such questions after giving them my best try.

If you want to try out the e-GMAT course that helped Bhavya make the jump of 100 points from 670 to 770, sign up for our Free Trial. We can also help you with a personalized study plan and give you access to quality online content to prepare. Write to us at acethegmat@e-gmat.com. We are the most reviewed GMAT prep company on gmatclub with more than 1950 reviews (as on Sep 7, 2020).

Rajat: I would like to add a few last words, I believe that even though you studied the same things and employed the same methods in your third attempt, you scored a 730 because of your confidence. You worked on your GMAT test strategy and refined it by giving mocks and sectional tests. This made you aware of the areas in which you could go wrong, and you were prepared for the questions and situations which the GMAT could throw at you. And your confidence in your preparation and test-taking strategy helped you achieve your target GMAT score. I would like to wish you all the best for your future.

Feel free to write to us at acethegmat@e-gmat.com with your questions.