GMAT Verbal is a refuge for people who are not strong in Quant. Most people believe that to ace the GMAT you have to be really good at Math. Ask Anupriya and she’ll refute this statement. She scored a 760 (99 percentile) on the GMAT with a Q48 (67 percentile) and a V46 (99 percentile). She even received an admit from the Indian School of Business. What makes the GMAT Verbal even more lucrative is the sheer scope of scoring in this section. Therefore, scoring high on GMAT verbal can be a gateway to scoring 760+ on the GMAT. But how can you score high on GMAT verbal?

There are 2 things to keep in mind.

Before going into how to score V40+ on the GMAT, first, let’s understand what makes GMAT verbal section important.

Here is the outline of this article: 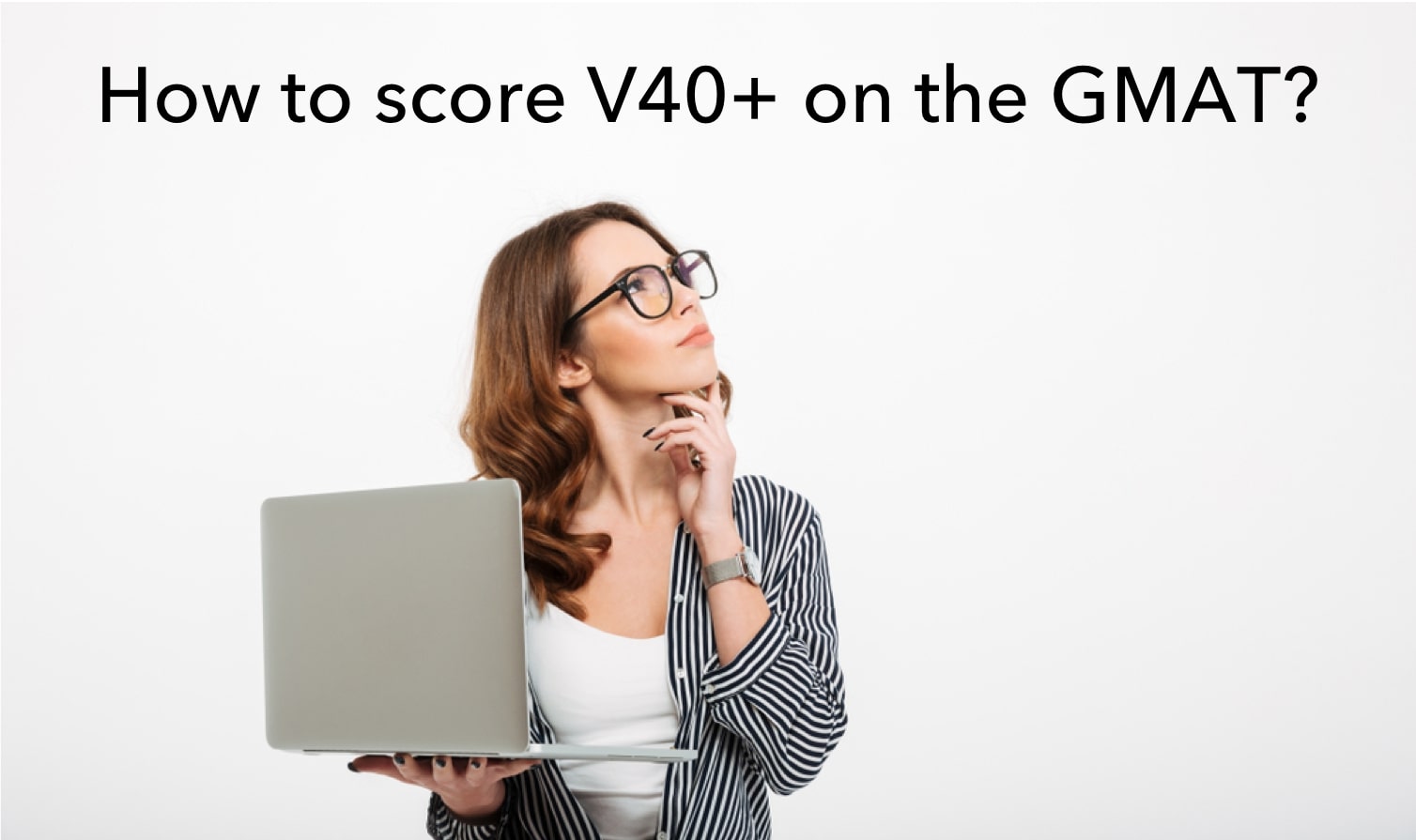 Your overall GMAT score is dependent on how well you do on the quant and verbal sections. You can score between 6 and 51 on both the sections. But, there is one catch. Scoring, let’s say, a 46 on both quant and verbal does not mean that you scored the same percentile in both sections. Take a look at the score and percentile chart below. 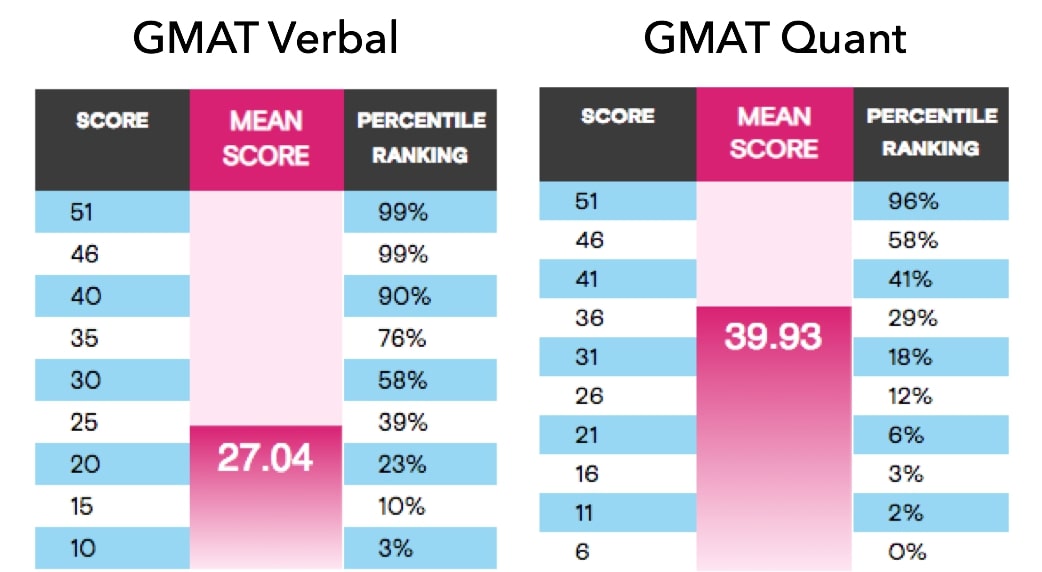 Therefore, scoring above V40 will definitely help you score 740+ on the GMAT, provided you score at least a Q50 on the GMAT.

Let’s take a look at what V40+ scorers did to improve the 3 verbal sub-sections i.e., Sentence Correction, Critical Reasoning, and Reading Comprehension.

Sentence Correction is the one sub-section with which many GMAT takers struggle while preparing for the verbal section. Why? Because most people don’t have a basic understanding of the building blocks of a sentence. That is why they struggle to deconstruct and construct a sentence to derive its meaning.

Therefore, it is essential to learn the meaning-based approach to solve SC questions, after all, GMAT SC is more about logic and meaning than grammar and vocabulary.

Let’s take the example of SC preparation from Rohan’s story who scored a 750 with a V40.

Rohan scored a V40 on the GMAT

Rohan’s story is remarkable because he comes from a vernacular academic background. He studied in a Gujarati medium school and therefore, he was apprehensive about the verbal section. His verbal score is proof that GMAT verbal, especially the SC sub-section tests logic and meaning rather than grammar and vocabulary. Take a look at his ‘SC accuracy based on question types’ from his ESR.

In SC, only 33% of his answers were correct on grammar questions. Still, he managed a score of V40.

In his debrief, Rohan said, “I started with SC and followed the meaning-based approach and was able to identify the error in 30 seconds by spending some time with the question stem before going to the answer choices.”

So, how does one learn the meaning-based approach?

Let’s take a look at Ram’s strategy to understand the meaning-based approach.

If you are planning to take the GMAT, we can help you with a personalized study plan and give you access to quality online content to prepare. Write to us at acethegmat@e-gmat.com. We are the most reviewed GMAT prep company on gmatclub with more than 1840 reviews (as on July 5, 2019). Why don’t you take a free trial and judge it for yourself?

Ram, before scoring a V41, made a simple but a consequential mistake. Before learning the meaning-based approach, he’d rely purely on ‘process of elimination’ approach. He would read the question and then immediately the options and would continue to re-read them until getting confused between two options and randomly marking an answer. At this point, his accuracy was 60 – 70%.

Take a look at the below infographic to understand his approach to solving SC questions before and after learning the meaning-based approach. 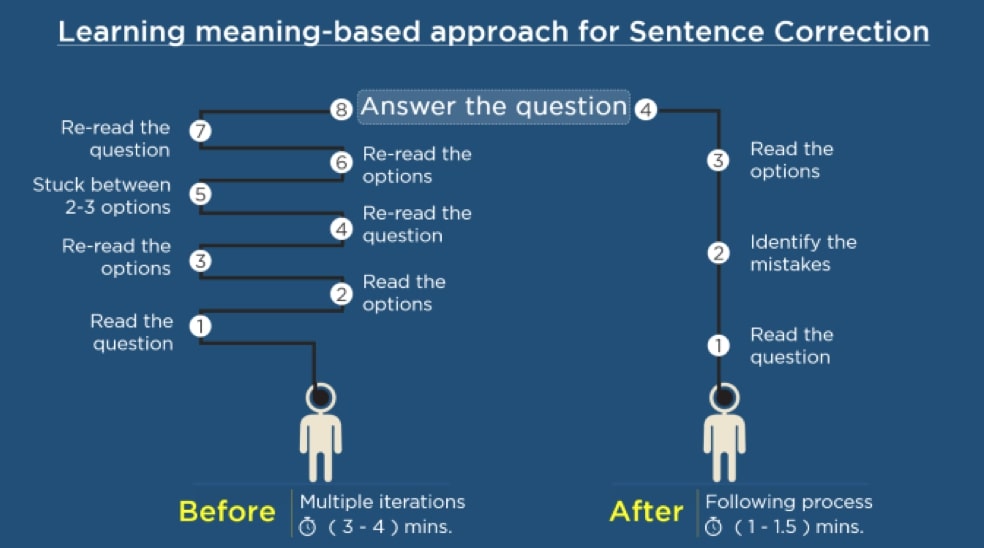 Therefore, he started with the Master Comprehension module to learn the components of a sentence and how to deconstruct a sentence. This module helped him to understand the meaning of a sentence in one read. This module also gave him a foundation to build his SC ability by learning the meaning-based approach. This approach helped him to identify the mistakes in the question before even reading the options. As he already knew the mistakes, the process of elimination became straight forward and it not only increased his accuracy but reduced the time per question to half.

Let’s take another example to solidify what strategies work to ace GMAT SC.

These strategies will help you reduce the time required per question and increase your SC accuracy.

How to improve Critical Reasoning

Critical reasoning tests your ability to analyze an argument and draw a logical conclusion. You’ll be asked questions on the following topics:

So, what can you do to improve GMAT Critical reasoning? Let’s take the example of Arjun.

Arjun improved from V26 to V41 by improving his CR and scored 730 on the GMAT in his fourth attempt. He later got an admit from Oxford’s Saïd Business School and Indian School of Business. 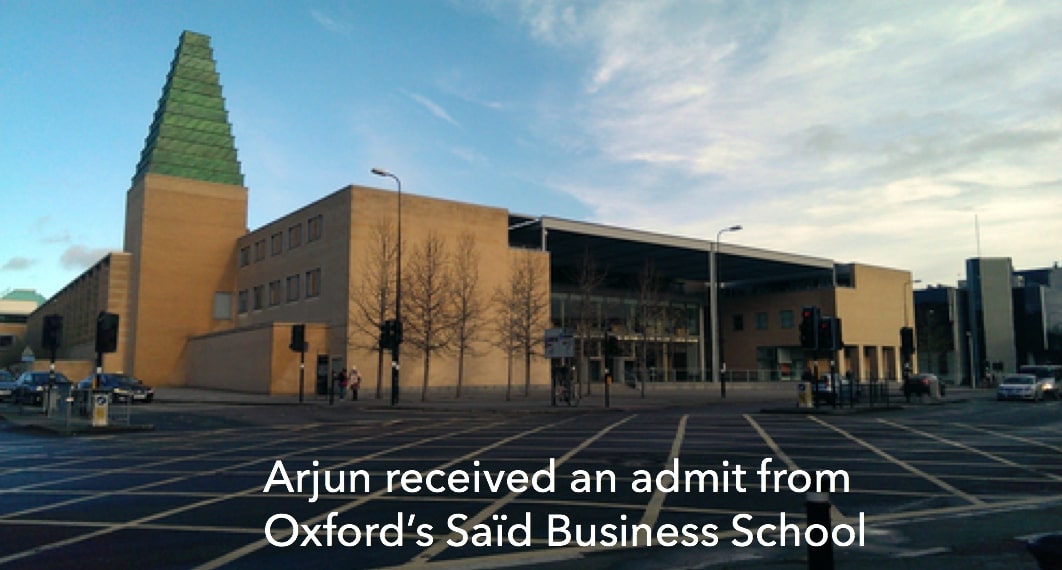 Therefore, before attempting GMAT for the fourth time, Arjun changed his preparation strategy. This time he focused more on learning concepts and analyzing mistakes.

This strategy helped him improve his verbal ability, especially in Critical Reasoning.

Let us talk about Bhavya’s strategy for CR.

She considered CR to be her strength. But still, she spent more than 3 minutes on each CR question. Her biggest challenge was to reduce her time per CR question. This is where the pre-thinking approach helped her the most.

How to improve Reading Comprehension

This is most overlooked sub-section of GMAT verbal owing to the less complex nature of this sub-section compared to SC and CR. However, after the change in GMAT format in April 2018, RC has become a more important sub-section. Therefore, you shouldn’t ignore the RC section and invest appropriate time to prepare it.

So, how to ace GMAT RC? Let’s learn from a few examples.

Even though she scored below V40, her story is worth mentioning because of her RC strategy. Initially, her reading comprehension ability was low (between 30% and 50%).

To tackle this weakness, she started reading from sources like The Economist. Then, she devised a 3-step strategy. She would

This approach required more time in reading the passage, but since she understood the information completely, she didn’t need to refer the text again. She was able to retain most of the information and answered the RC questions in one go.

Bruno scored a staggering V42. An achievement he credits to understanding the logic behind the questions. Since meaning-based approach and pre-thinking approach use logic to find solutions to questions, he performed well in both SC and CR.

His more significant challenge was the RC section. He had heard about a short-cut approach which tells you to read 20% of the passage and start answering questions. He tried this approach and failed. He realized it is just a waste of time since he had to revisit the passage again and again to answer the questions.

Thus, he scored a 42 on his verbal section.

Let me retake the example of Bhavya. She used to skip reading the whole passage and read only the first and last sentence of each paragraph. This strategy resulted in her revisiting the passage again and again and wasting valuable time. As she felt pressured due to lack of time, she would randomly mark the answers.

What she did was that instead of skipping, she started skimming the passage. She started to pay attention to the author’s tone and opinion. This strategy helped her understand the essence of the passage and separate important information from the unimportant. With this approach, she mastered reading comprehension.

To ace GMAT Reading Comprehension you should:

Building your verbal ability is definitely going to help you score a V40+, but a planned effort during the test will fetch you those extra 2-3 points and boost your GMAT score.

You can learn a good test-taking strategy from Alok.

Alok scored V40 on the GMAT by employing a skipping strategy

Alok scored a 740 (Q50, V40) on his second attempt and improved from V33 in his first attempt. He said, “While my first attempt was all about studying, my second attempt was all about planning.” What he did was that he identified his weak topics from skills data in Scholaranium. These were the topics from which he was more likely to give incorrect answers. Moreover, he was comfortable in answering 37-38 questions with high accuracy. Based on this data he devised a skipping strategy. 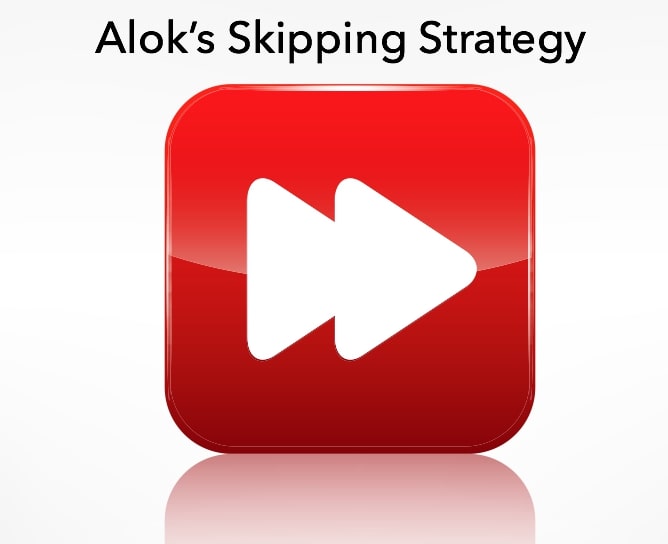 A skipping strategy does not mean that you don’t answer questions (you are not allowed to leave a question unmarked in GMAT). Instead, you randomly mark the answer to the question you are not sure of so that you can devote time to questions where you are confident of answering correctly.

He skipped 4-5 questions including an entire RC passage on his actual GMAT and still managed to score a V40. This score clearly shows that it’s not accuracy that GMAT tests, rather GMAT tests your ability.

Therefore, devising a strategy based on your weaknesses is a key to scoring high on GMAT verbal.

Above were some verbal tips from people who aced the GMAT, especially its verbal section. These tips on Sentence Correction, Critical Reasoning, and Reading Comprehension will definitely help you prepare well for the verbal section. 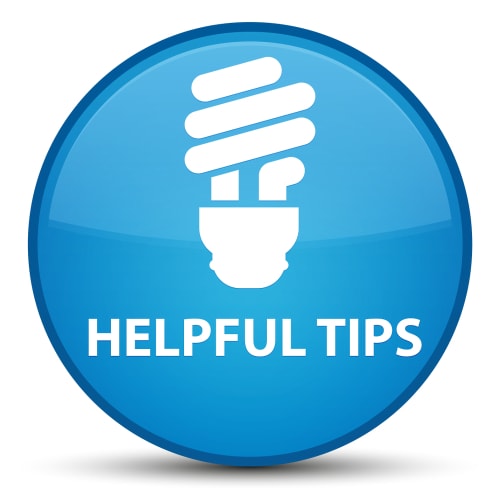 The pre-thinking approach to solving CR questions is the most effective process, and you should stick to it. For RC passages the best strategy is to summarize each paragraph and note down key takeaways and tone of the author.

Lastly, remember to devise a skipping strategy for GMAT verbal section based on your weak topics. It is better to skip questions which you are unsure of answering correctly.