Usage of “being” in the GMAT 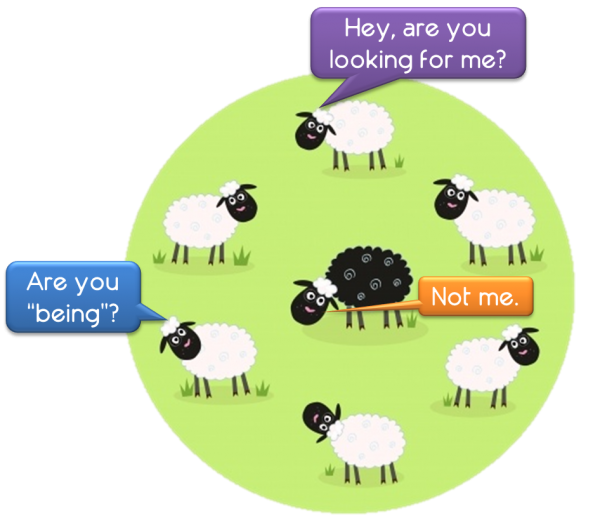 So it’s time to bust another (I would not call it a myth but rather) very common perception. For some reason, it is a common notion among GMAT takers that the use of “being” is considered incorrect in GMAT SC.  Below is my brief take on “being”

“Being” is very much a part of the English language.  Like any other entity, if used correctly, it will make a sentence grammatically correct and vice-versa. For example, “due to,” if used correctly in a sentence, will make the sentence correct. If we use “due to” to present the reason for any action, then it is certainly incorrect. Similarly, if we use “like” to present examples, then it will certainly make a sentence incorrect, but if it is used to present a comparison, then its usage is correct.

So declaring “being” the “contaminated” entity that makes the answer choices incorrect is going too far.   In fact, when we examine a sentence for its correctness, we should see if “being” is used correctly in the sentence, just the way we verify the correct usage of other entities in the answer choices. We embrace “being” when it is used correctly and discard it if it is used incorrectly.

What’s covered in this article?

I start this article by explaining that the mere presence of being does not make an answer choice incorrect. I then explain two correct usages of being (common ones) with examples. Following this, I list 6 SC sentences in which the correct answer choice contains “being”. This is followed by my take on how you should approach SC.

For your easy navigation:

“Being” does not make an answer choice incorrect

Let me talk about two such problems where the incorrect answer choices are incorrect not because of “being” but for some other culprits.

In an effort to reduce their inventories, Italian vintners have cut prices; their wines have been priced to sell, and they are.

1. have been priced to sell, and they are

2. are priced to sell, and they have

3. are priced to sell, and they do

4. are being priced to sell, and have

5. had been priced to sell, and they have

Let’s deal with this problem in the e-GMAT style.

The Italian vintners wanted to reduce their inventories. In order to do so, they have cut prices. They have reduced the selling price of their wines so that they can sell more. And indeed, the sales have increased.

We are not doing the Error Analysis here because the errors in the original choice do not encompass the topic of discussion of this write-up. Since we are concerned about the usage of “being”, let’s analyze the function of “being” in answer choice D. This is the only choice that has “being” in it.

Before I begin the analysis, I must let you know about the correct usages of “being” so that we can ascertain whether the usage of “being” in this answer choice is correct or not.

Correct usages of “BEING”

Following is the excerpt from a post on “Beat the GMAT” by Payal Tandon, the co-founder of e-GMAT, on the correct usage of “being”:

When Being is used as a noun. For example:

Being disrespectful to elders is not acceptable behavior.

Notice the subject here – being disrespectful to her elders

When passive continuous verb tense is required to communicate the meaning. For example:

The residents of this 100-year-old apartment complex are being evacuated because of the structural instability of the building.

Anyway, let’s get back to our example 1 now. Choice D of OG13#91 reads: are being priced to sell, and have

Note that in this answer choice, there is absolutely no problem with the usage of “being”. Here “being” has been used as part of the present continuous verb in passive voice – our Correct Usage 2. So “being” is not the nasty one in this choice. It is the helping verb “have”. We need to say that the prices have been cut to sell and they sell/do. It is ungrammatical to use “sell” after “have” as we can only use “sold” after “have”.

“being” gets a clean chit here.

Idioms are one the most widely tested concepts on the GMAT SC. We cover all the concepts required to ace the GMAT SC, starting from the foundations of GMAT grammar in the e-GMAT SC course. We also have 400+ GMAT level practice questions with detailed solutions. Begin your GMAT preparation with our free trial today!

Spanning more than fifty years, Friedrich Muller began his career in an unpromising apprenticeship as a Sanskrit scholar and culminated in virtually every honor that European governments and learned societies could bestow.

1. Muller began his career in an unpromising apprenticeship as

2. Muller’s career began in an unpromising apprenticeship as

3. Muller’s career began with the unpromising apprenticeship of being

4. Muller had begun his career with the unpromising apprenticeship of being

5. the career of Muller has begun with an unpromising apprenticeship of

The drill remains the same – we will analyze this problem the e-GMAT way.

Friedrich Muller’s career spanned more than five decades. Muller started his career in an apprenticeship as a Sanskrit scholar. When he retired, he had gotten every honor that European governments and learned societies could bestow.

Allow me to digress here a little bit and talk about the opening modifier first. In some time, you will why I am doing this.

By looking at the opening verb-ing modifier that lies in the non-underlined portion of the sentence, you will in no time discard Choices A and D because “spanning” must modify Muller’s career and not Muller himself. This is a clear modifier error.

Now let’s look at the only other choice containing “being” – Choice C. The issue with this choice is not the usage of “being” but the usage of “of being…” which leads to idiom error. Muller’s career started… as a Sanskrit scholar. This is the correct expression.  The use of “of” makes it incorrect.

Now if the question maker had used “of becoming…” instead of “of being…”, then also this choice would have been incorrect because the culprit here is “of”. The answer choice uses “being” because such expressions are widely used in colloquial speech. Any other word such as “becoming” here would have made this one an easy choice to eliminate.

I do agree that usage of “being” is incorrect here as it does not fall under any of the Correct Usage categories mentioned above. The point I’m trying to make here is that “being” could not have been used correctly here because the option does not provide for that scope. It is similar to the modification of the opening modifier.

The moment we read “Spanning more than 50 years”, we know that the subject of the following clause should be Muller’s career and not Muller. The same can be said about the usage of “being” here. The structure of the answer choice just cannot make room for the correct usage of “being”.

More Official examples of correct usage if “being”:

Let me pay my dues to “being” by stating a few official examples where “being” HAS BEEN USED in the CORRECT ANSWER CHOICE. Here are six such instances.

Being heavily committed to a course of action, especially one that has worked well in the past, is likely to make an executive miss signs of incipient trouble or misinterpret them when they do appear.  (Correct Usage 1)

Simply being genetically engineered does not make a plant any more likely to become invasive according to a decade-long study published in the journal Nature. (Correct Usage 1)

The survival of coral colonies, which are composed of innumerable tiny polyps living in a symbiotic relationship with brilliantly colored algae, is being threatened, experts say, not only by pollutants such as agricultural runoff, oil sticks, and trash, but also by dropped anchors, probing drivers, and global warming. (Correct Usage 2)

According to one expert, the cause of genetic irregularities in many breeds of dog is not so much that dogs are being bred for looks or to meet other narrow criteria as that the breeds have relatively few founding members. (Correct Usage 2)

During the 1950s, as part of their therapy, young polio victims learning to live with their disabilities were helped to practice falling so that they could learn to fall without being hurt. (Correct Usage 1)

“Almost Incorrect” is not for GMAT

From my experience with GMAT SC, I am fairly confident that there is no scope for “almost incorrect” in this section. Not many realize it but actually, SC is a very logical test of one’s ability to communicate the message in a correct, concise, and unambiguous manner. Like any mathematical problem, the usage of certain entities is either correct or incorrect.

It is not difficult to discern that when used correctly in the context, an entity stands correct and when used incorrectly, it leads to errors. The way we analyze the usage of modifiers, SV and pronoun-antecedent number agreement, idioms, etc. in the same way “being” also calls for proper analysis before rejecting an answer choice that contains this word.

Now compare the usage of “being” with that of “like”. When we see “like” in a sentence, we try to figure out why it has been used in the sentence. According to GMAT, “like” must always be used to present comparison. But there are many questions that use “like” to present an example in a sentence. This usage is most certainly incorrect. So, we only reject an answer choice with “like” when it presents examples. And we do so only after analyzing thoroughly the function of “like” in that particular sentence. But do we ever classify “like” as a red flag? We don’t. Then why to do that with “being”.  We must reject an answer choice with “being” only when we have analyzed that the word has been used incorrectly in the sentence as we would do with any other entity. Anything that requires a little analysis before being rejected or accepted, CANNOT be classified as “the black sheep”.

This is one topic many people use to propagate their views. Not surprisingly, this point has been used to declare “being” as a red flag on GMAT SC. However, at e-GMAT, we tell something very simple to our students. What’s the point in saving time if you select incorrect answer choices because you probably skipped some analysis to save time?

Test takers must first work towards improving their accuracy. The preparation time allows them the luxury of time to practice and be perfect in the approach they apply to solve SC problems. Once that perfection is reached, the time taken to solve each question automatically plummets because the process to solve SC problems becomes intuitive with time.

So yes, do make good use of your time now so that you are well prepared to use it intelligently on D-day.

Also, read our article on when to use “due to” and “because of.”

Idioms are one the most widely tested concepts on the GMAT SC. We cover all the concepts required to ace the GMAT SC, starting from the foundations of GMAT grammar in the e-GMAT SC course. We also have 400+ GMAT level practice questions with detailed solutions. Begin your GMAT preparation with our free trial today! 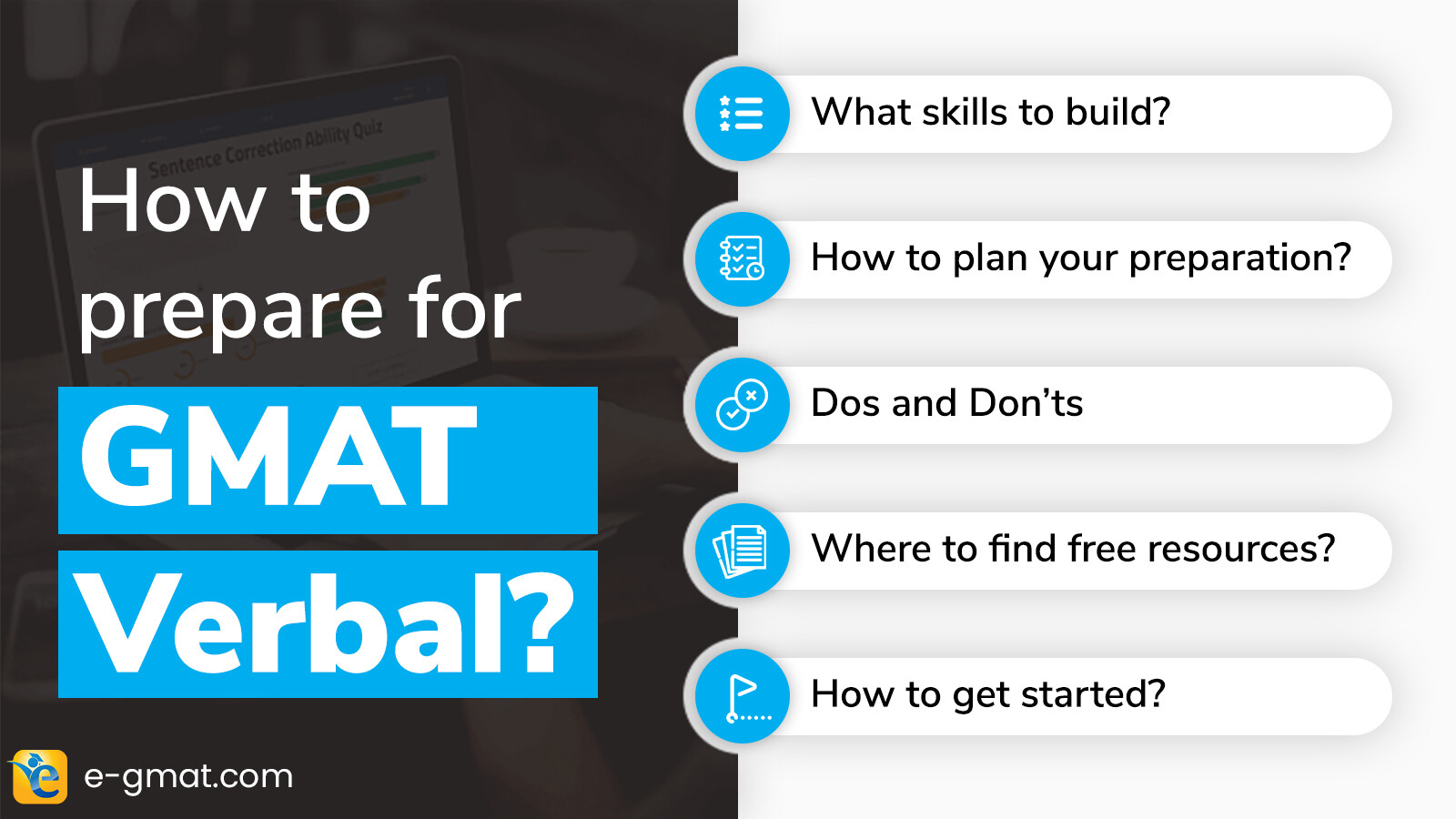 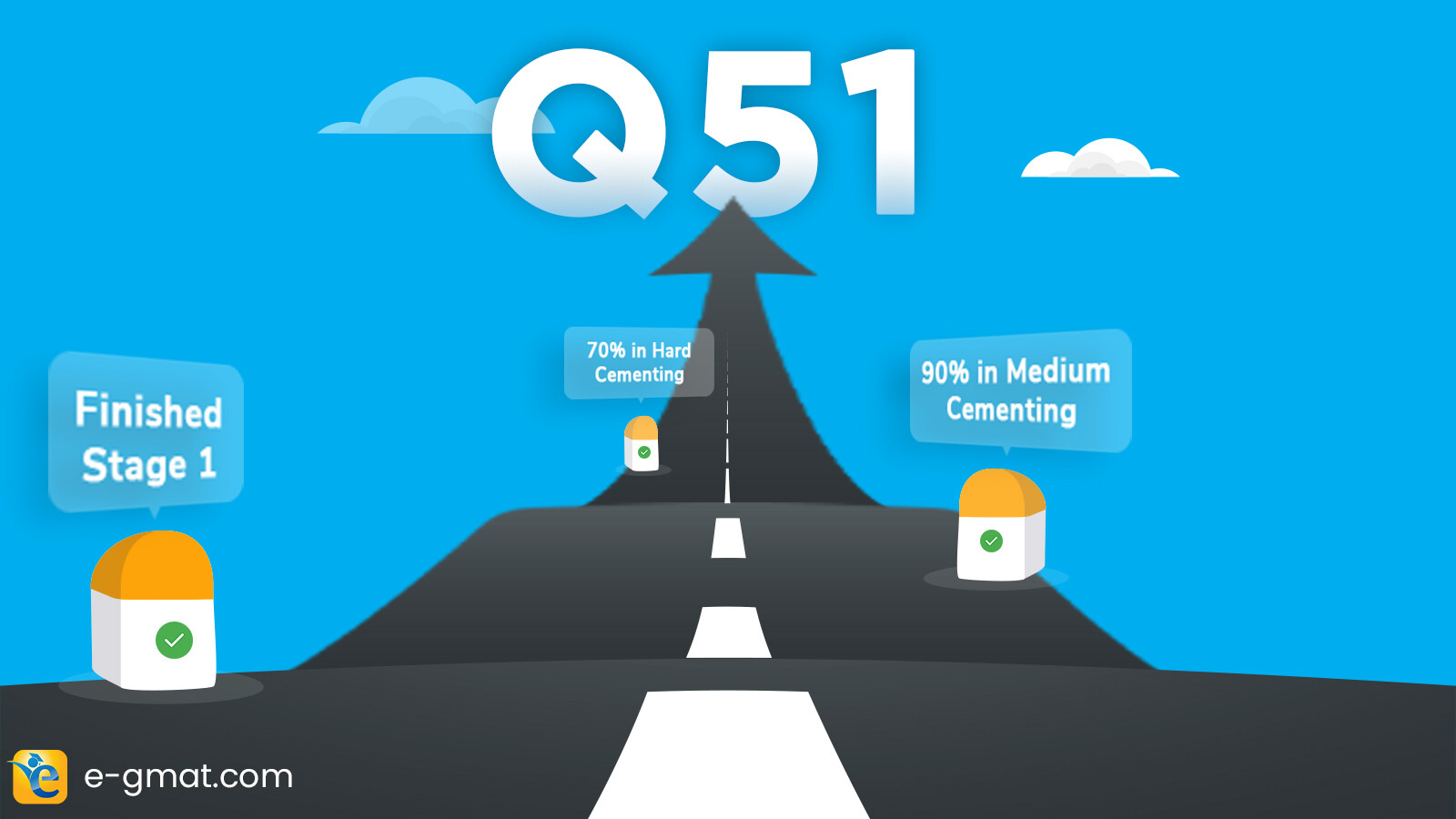 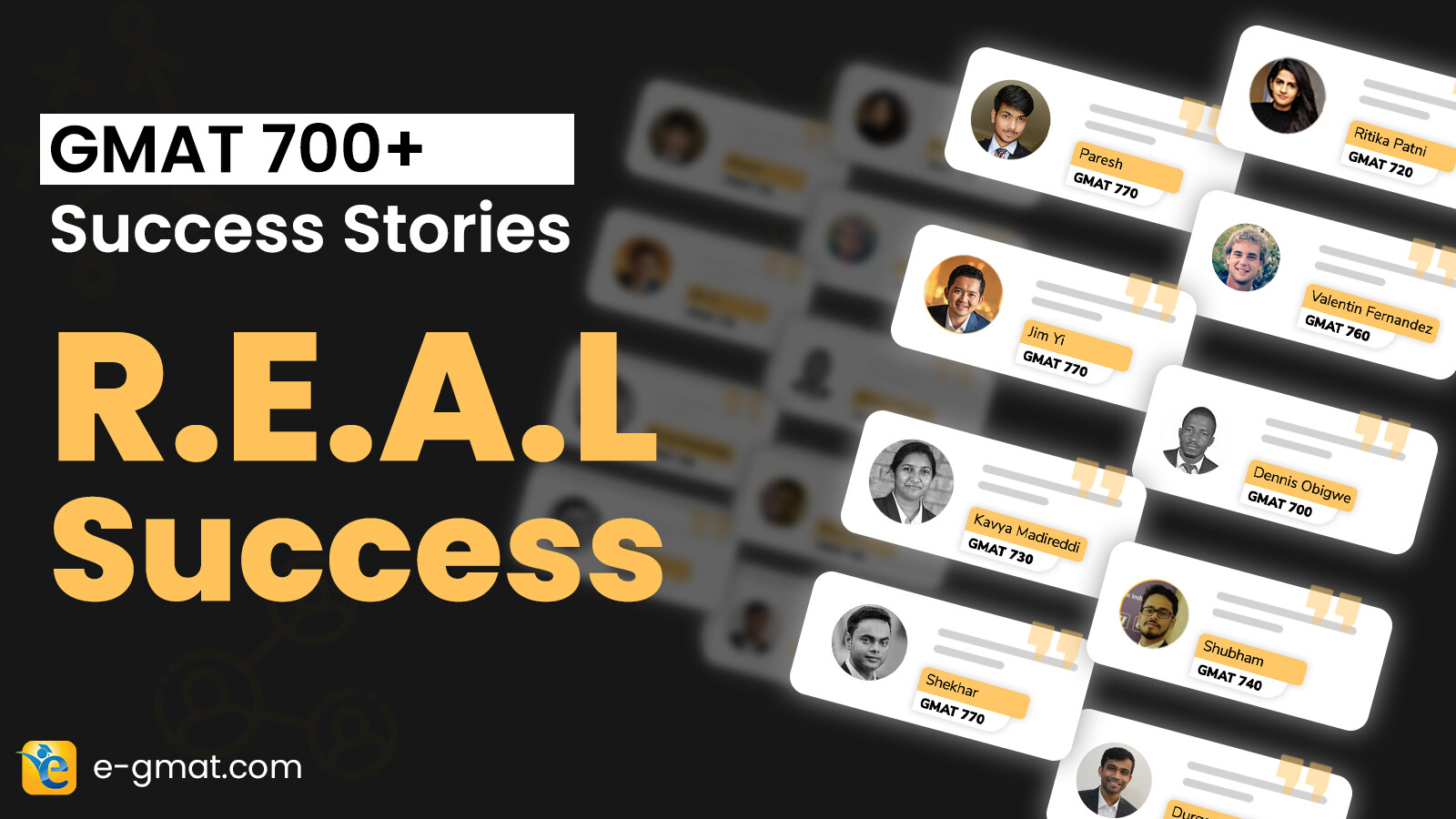