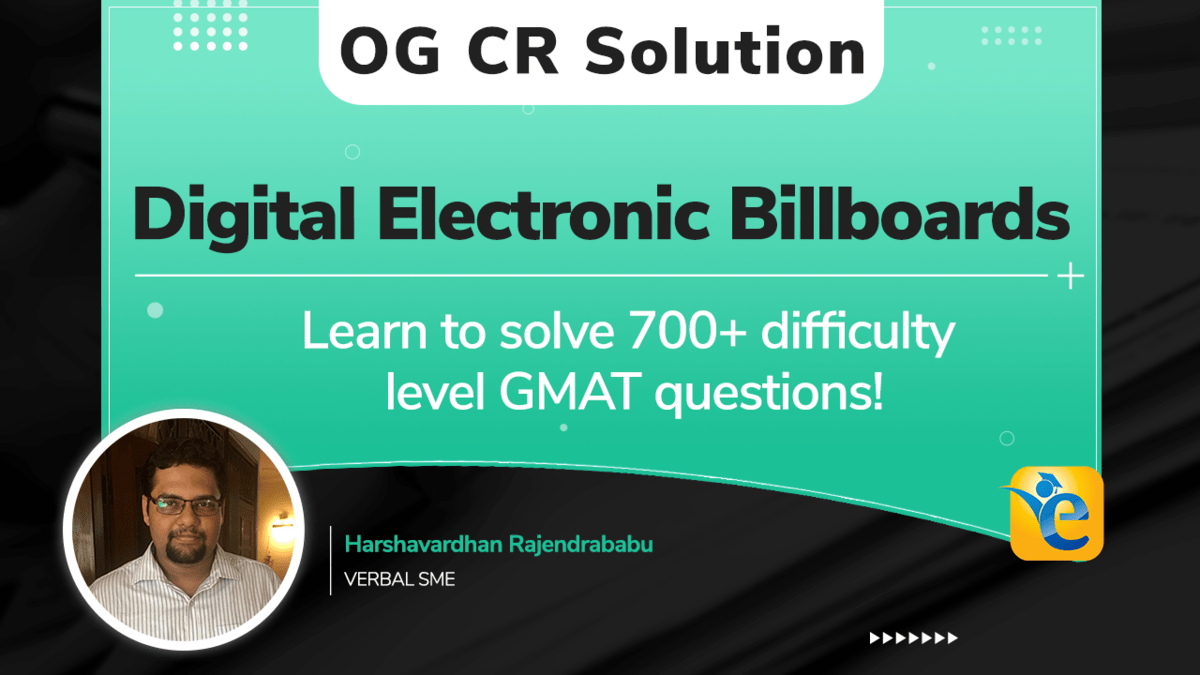 In this article, we’ll look at the solution to this Official Guide (OG) question CR46521.01 – “City resident: These new digital electronic billboards should…” on critical reasoning:

Hey folks! In this article, we are going to study one of the most distinctive CR question types on the GMAT – Analogous or Parallel Reasoning. The approach that you read here will help with all structure-based CR questions!

This is a rare question type – Parallel Reasoning. In this case, we need to find an option choice that depicts a strategy that can be considered analogous/similar to the strategy used by the spokesperson in the argument.

A question such as this tests us on our ability to understand the underlying structure. This means that we need to identify the structural elements in the passage and understand how they are linked. This is not very different from how we analyze Boldface arguments.

The most important point – never skip prethinking in such questions. If you spend time trying to understand the underlying structure, parallel reasoning questions are very, very easy (Trust us, we know)!

On the other hand, if you move to the answer choices without prethinking about the structure, you are minimizing your chances of solving the question correctly, and within time. Remember – at least one tricky incorrect choice will always be there among the options to create confusion.

Let’s now solve the question and see what we can learn from it!

The city resident makes a claim based on his/her own opinion/belief. No evidence or data is offered to support the claim, only an opinion.

The question is asking us to identify an option that employs a similar strategy as the one employed by the OAS.

So, what has the OAS done from a structure standpoint?

So, a perfect answer choice would be one in which an X provides evidence/data to disprove Y’s opinion/claim, and then further adds an explanation for why Y could have ended up with the incorrect opinion (I.e., incorrect as per X).

Fun Sidenote: While solving a question in real-time, we should move to options after this level of analysis. But, when you get time to analyze the question in more depth, I encourage you to create your own arguments based on the same structure as practice.

This exercise will build up your comfort levels with all types of argument structures.

An example I created (for all the Brooklyn 99 fans reading this!):

Option A is the correct answer, whereas options B, D, and E are all popular but incorrect. Let us analyze each option in depth.

Option A: A doctor dismisses a patient’s claim to have had a heart attack, citing a cardiac enzyme blood test.

The doctor uses evidence (cardiac enzyme test) to disprove the patient’s claim. This does match the structure we are looking for, albeit partially. There is no mention of the doctor providing an explanation for why the patient felt he got a heart attack, though.

Keep this option choice under consideration for now. It covers part of the structure we observed. So, it does resemble the structure somewhat.

Option B: A politician rejects an accusation of perjury by denying the credibility of witness testimony.

The politician does not use any evidence/test results/data to counter the accusation; he/she merely claims that the witness is not credible, without any actual evidence/data. Also, the politician provides no reason to explain why someone may unfairly accuse him/her of perjury. So, option B does not match the structure.

Option C: An insurance agent rejects a claim, on the grounds that there is insufficient evidence to support the claimant’s testimony.

The insurance agent neither presents any objective evidence/data to support his/her conclusion that the claim should be rejected, nor does he/she provide any explanation for why someone may falsely perceive that the claim is valid.

So, option C does not match our structure.

Option D: An investigator casts doubt on the results of a lie detector, citing the subject’s report of illness during the test.

This is a clever option. We need to be careful!

In the passage, the spokesperson brings in data/evidence to prove his/her point. There is no evidence/data given against his/her conclusion, and so it is not true that he/she casts doubt on any evidence/data. The spokesperson is the one bringing in the evidence!

Here, however, the investigator casts doubts on a piece of evidence/data (results of a lie detector test) instead of presenting his/her own evidence/test results/data. So, option D goes in the other direction of our actual structure at some level.

Option E: A psychologist treats a mental illness by encouraging a patient to abandon inconsistent beliefs.

There is no claim made by the patient that gets rejected here. Also, the psychologist does not bring in any data/evidence to counter a claim. Also, in the passage, the city resident does not have any inconsistent beliefs that the spokesperson tries to encourage him/her to abandon. So, this option is completely irrelevant.

As we can see, the only option that even closely matches the structure of the spokesperson’s strategy is option A. It is the correct answer.

Now that we have solved the question, let’s summarize. Here are some important lessons:

There are quite a few questions that involve a conversation between two people. Here is one you should try:

OG Question 1 – Sasha: It must be healthy to follow a diet high…