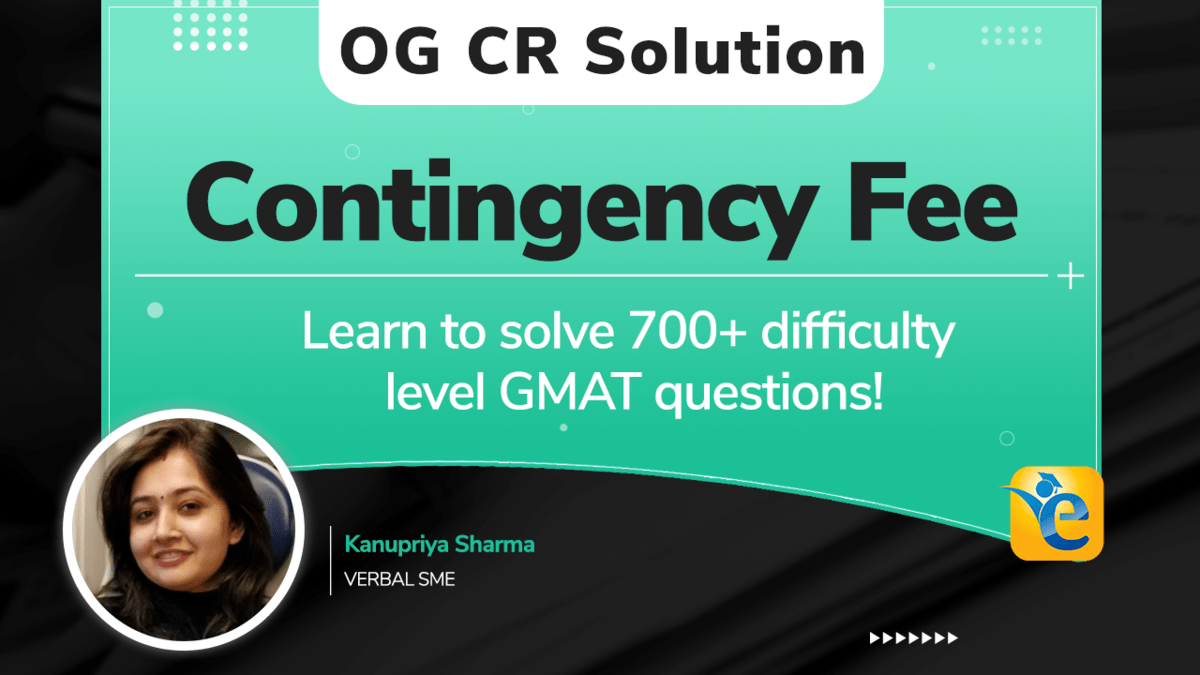 In this article, we’ll look at the solution to this Official Guide (OG) question – CR15380.01 – “The Contingency- Fee System” on Critical Reasoning:

The contingency-fee system, which allows lawyers and their clients to agree that the lawyer will be paid only in the event of success, does not increase the number of medical malpractice lawsuits brought against doctors. As attorneys must cover the costs for their time and research, they want to be assured that any medical malpractice case they accept on a contingency-fee basis has substantial merit. Consequently, attorneys turn away many people who come to see them, for lack of a good case.

The argument above is most vulnerable to criticism on the grounds that it fails to..

I am here with another Flaw-Based question from OG Advanced. This question is another attempt by OG to emphasize the importance of passage analysis and visualization– Yes, that is what makes this question hard for some students and easy for others. There are two traps in this passage-

If the passage and conclusion are clear to you, answer choice analysis in this question becomes a cakewalk. Let’s get straight to it.

Understanding The Passage and The Conclusion

The passage talks about a system named the contingency-fee system (CFS). Under this system, there is an agreement between a client and his lawyer that the client will pay the lawyer’s fee only if the lawyer is successful in the client’s case.

So, we got to know what CFS is. Let’s move forward.

As per the author, CFS does not increase the number of medical malpractice lawsuits filed against doctors.

A few important things to notice:

So, shall we move ahead? No.

Here is an important question that you need to ask to understand the logic of the passage- How can such a system impact the number of lawsuits against doctors?

The only logic possible is that when clients know that they will not have to pay the lawyer unless the lawyer is successful, they may not think twice before approaching the lawyer- after all, there is nothing to lose. So, a system such as CFS may lead to an increased number of lawsuits filed against doctors.

However, as per the author, that does not happen.

Understanding this logic is very important in order to understand the passage. If you do not ask such questions, you will understand just the literal meaning of the passage- the logic will not be clear. You are likely to find the question hard in such a situation.

At e-GMAT, we motivate students to ask such questions so they can visualize the complete passage as a beautiful and logical story. The rest of the steps then become very easy.

Now we get to know a fact about attorneys, i.e., the lawyers. The fact is that the lawyers need to cover the costs for the time and research that goes into a case.

Hence, in order to ensure that they are paid for their effort, they accept only those CFS-based lawsuits that they think are winnable.

So, here we get to know the reason why the author claims that CFS does not lead to an increase in the number of given lawsuits.

The author here explains his previous point. Since the lawyers need to make sure that they are paid for their effort, they reject many CFS-based lawsuits.

However, is that correct? Clearly No. The word “consequently” merely shows the cause and effect. The last statement is not even a claim.

The main conclusion has to be a claim derived by the author.

The only claim made by the author is that CFS does not increase the number of medical malpractice lawsuits filed against doctors. Hence, it is the only possible main conclusion in this argument.

For arguments in which we have to identify the main conclusion out of two conclusions, we can do that easily by applying the ABC test covered in our course. However, in this question, since we have just one claim, the ABC test is not required.

Now that we know what the passage is about and what the conclusion is let’s find the flaw in the argument.

Flaw in The Argument

Since we are required to find a flaw, we need to think about where the author’s reasoning can go wrong and in what case can the CFS lead to an increase in the number of medical malpractice lawsuits filed against doctors?

The author’s logic is that CFS motivates clients to approach lawyers without even thinking twice since they do not have to pay the lawyer’s fee. However, many of the CFS-based cases get rejected by the lawyers, and hence the number of such lawsuits remains the same.

However, what if the number of CFS-based lawsuits rejected by lawyers is less than the additional CFS lawsuits filed? For example, what if CFS motivated 100 instead of 50 people to file lawsuits, but only 20 of these got rejected? In such a case, instead of 50 cases, 80 cases would get filed, and the conclusion would not hold true.

A possible scenario can be one in which clients having cases with substantial merit do not approach the lawyers because of the fee that they would have had to pay in order to file a lawsuit. With CFS, they need to worry about the fee only if they win the case. Hence, CFS can motivate such clients to approach lawyers, and these cases will not even get rejected. As a result, CFS will lead to an increase in the number of such lawsuits.

Hence, we can say that the argument does not consider the scenario in which the number of CFS based lawsuits rejected by lawyers is less than the additional CFS lawsuits filed.

Now that we have identified the flaw, let’s move to answer choices:

We need not know the criteria being used by the attorney for selecting the cases. The criteria can, at best, help us understand whether they are selecting the right cases or not. However, is that the point of the argument? No, the argument is concerned with the increase in the number of cases because of CFS. It is not concerned with the kind of cases that get selected by the attorneys.

This choice is in line with our prethinking. The argument fails to consider the likelihood of people filing meritorious cases approaching the lawyers in the absence of CFS.

Hence, this choice is the correct choice.

This choice is about a comparison between the monetary award for a successful case received under CFS vs. that received otherwise.

In other words, it compares the monetary benefit associated with winning a CFS case vs. any other case.

So, this choice is about the lawyer’s preference for a CFS case vs. a non-CFS case, i.e., if given a chance, would a lawyer prefer CFS case over non-CFS case.

However, the passage is not about a lawyer’s preference for CFS vs. non-CFS cases. It is solely about the impact of CFS on the increase in the number of medical malpractice lawsuits brought against doctors.

So, if CFS increases the number of such cases from 50 per year to 100 per year, and lawyers continue to get 50 non-CFS cases per year, then their preference will not be able to keep CFS cases under check.

If you selected this choice, then you need to be more careful while understanding the passage. Such out-of-scope answer choices are very easy to eliminate.

We do not know how the rising cost of medical malpractice insurance can affect our argument. Hence, this choice is also irrelevant.

If you want to practice more Flaw-Based questions, you can try to solve this question.