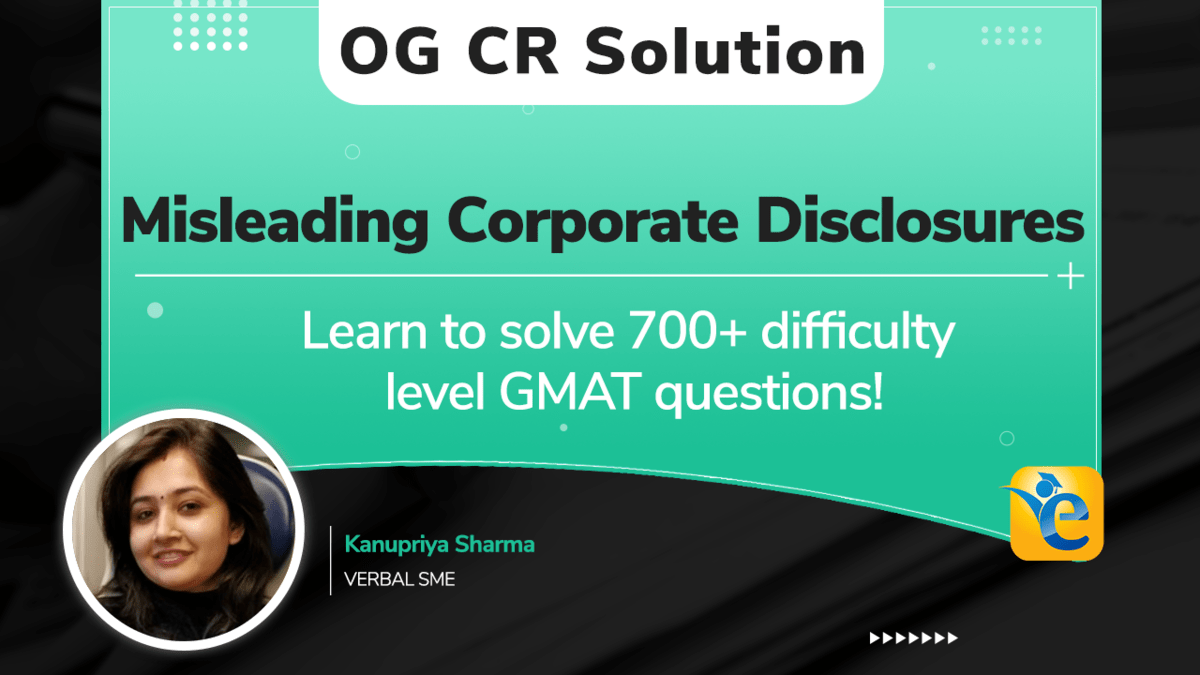 In this article, we’ll look at the solution to this Official Guide (OG) question CR56601.02 – “When new laws imposing strict penalties for misleading corporate disclosures…” on critical reasoning:

CR56601.02 – When new laws imposing strict penalties for misleading corporate disclosures were passed, they were hailed as initiating an era of corporate openness. As an additional benefit, given the increased amount and accuracy of information disclosed under the new laws, it was assumed that analysts’ predictions of corporate performance would become more accurate. Since the passage of the laws, however, the number of inaccurate analysts’ predictions has not in fact decreased.

Which of the following would, if true, best explain the discrepancy outlined above?

Here is the outline of the article:
[hide]

Did you too select choice C or choice D for this question? Are you also wondering what went wrong? Well, you were close, but there are some aspects that you need to focus on. Let’s see.

Both choices C and D talk about factors that can have an impact, but do they actually have that impact? We will have to check.

Choice C- Even before the new laws were passed, the information most corporations released was true.

Probably you thought that if choice C is true, then the new laws have not made any difference, and hence you have a reason to think that number of inaccurate predictions will not go down.

If that was the case, then you faltered while analyzing the passage. The passage mentions that the amount and accuracy of information disclosed will increase under the new laws. Hence, even if most corporations were providing correct information earlier, the new laws would ensure more information and more accurate information.

In this case, even though the company was providing correct information earlier, it was not as accurate as the one it provided later. Also, the new information also talks about the average age of employees, something that was not discussed earlier.

Hence, the new information should have definitely helped make the predictions more accurate.

Therefore, this choice does not resolve the paradox.

Choice D – Analysts base their predictions on information they gather from many sources, not just corporate disclosures.

If you selected choice D, then you had the assumption in mind that any of the other source/sources could have reduced the accuracy of predictions because of which the number of inaccurate predictions has not gone down.

So now you know where you faltered! You selected an answer choice that is based on an assumption.

In other words, unless anything has been mentioned about other sources, we cannot assume that they compensated for the increased accuracy and more information.

Without this assumption, the choice does not help resolve the paradox because if other sources continue to be as they were, the overall accuracy of predictions should have improved as a result of increased accuracy and more information.

Correct Choice E – The more pieces of information corporations release, the more difficult it becomes for anyone to organize them in a manageable way.

This choice provides a reason why the number of inaccurate analysts’ predictions did not go down- because even though they had access to an increased amount and accuracy of information, it was difficult to organize it.

Hence, this choice resolves the paradox.

Choice A – The new laws’ definition of “misleading information” can be interpreted in more than one way.

Choice B – The new laws require corporations in all industries to release information at specific times of the year.

As in choice A, irrespective of when the information is disclosed in the year, analysts had access to an increased amount and accuracy of information, and thus their predictions should have become more accurate.

Do try the following Weaken questions to learn more about correct weakeners:

Suriland cannot both export wheat and keep bread plentiful and affordable in Suriland. Accordingly, Suriland’s wheat farmers are required to sell their crop to the government, which pays them a dollar per bushel less than the price on the world market. Therefore, if the farmers could sell their wheat on the world market, they would make a dollar per bushel more, less any additional transportation and brokerage costs they would have to pay.

In a certain rural area, people normally dispose of household garbage by burning it. Burning household garbage releases toxic chemicals known as dioxins. New conservation regulations will require a major reduction in packaging—specifically, paper and cardboard packaging—for products sold in the area. Since such packaging materials contain dioxins, one result of the implementation of the new regulations will surely be a reduction in dioxin pollution in the area.