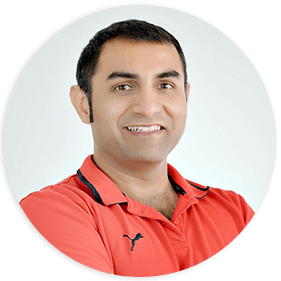 e-GMAT was founded 10 years ago – in September 2011 – by a researcher/educator duo who, in order to build the company, overcame a trifecta of challenges: unfamiliarity with content, inexperience with technology, and no external funding. Over the past decade, e-GMAT – founded using $10,000 in personal savings – has become the most successful e-learning platform for GMAT prep globally, delivering 3,000+ GMAT successes and over $200 million in scholarship rewards for our students.

Here’s a brief snapshot of how we did it.

At the heart of the e-GMAT platform is a genuine passion for helping young professionals realize their MBA dreams. e-GMAT founder Rajat Sadana, recalling his own struggles with the GMAT in 2002, strongly connects with challenges faced by GMAT aspirants and keeps the student at the center of everything he does. This shared tenet drives the different teams at e-GMAT as they develop innovative products to help e-GMATers excel.

This customer-centricity has helped e-GMAT engineer disproportionate success over the past decade. e-GMAT has received 2,180 verified reviews from successful students on GMAT Club, 4-times greater than the next most successful GMAT prep platform. These reviews are vetted and verified by the GMAT Club, which confirms the authenticity of the GMAT Score Report to ensure accuracy in reporting. Over the past five years, five months, and five weeks, e-GMAT has produced more GMAT successes than those experienced by all top competitors combined, making e-GMAT the best in the industry with metronomic consistency.

This customer obsession is reflected in the passion the e-GMAT community has for the company. On the e-GMAT YouTube channel, you can find 400+ e-GMAT successes spending 30-to-90 minutes with us discussing how the e-GMAT platform contributed to their success; this is 20-times greater than the video debriefs published by competitor Target Test Prep.

Despite achieving incredible student success, we’re only getting started. Our team has ensured success at an astounding rate. From January to August 2021, our students reported 175 GMAT successes on the GMAT Club, averaging 23 700+ scorers every month – 10X as many as the average GMAT Club partner reported. Our ruthless dedication to our students has delivered overwhelming success, and we don’t see it slowing down. It’s noteworthy that while these numbers are only the number of “reported” reviews published on the GMAT Club, the actual success is 10X these numbers. This is because 80%-90% of the students shy away from publishing a review or writing a debrief. Here’s some data reflective of this success:

Try out our free trial that gives you access to more than 400 questions, more than seven webinars conducted by top instructors on GMAT Club, and one free mock test? We are the most reviewed online GMAT Prep company with 2200+ reviews on GMATClub.

Years ago, as Rajat prepared for his own GMAT attempt, he noted a severe deficiency of helpful resources. Outside of a few prep workbooks and the Official Guide, few resources existed that helped aspirants build a robust conceptual understanding required to crush the GMAT, much less personalize that content to the test taker’s own unique skill-set. So, with a burning desire to help diligent students ace the test, Rajat and Payal – e-GMAT’s founding duo – sought to redefine the way students prepped for the GMAT.

It all started with the “Meaning-based Approach,” a landmark innovation in the GMAT space, which urged test-takers to avoid short-cut tricks in Sentence Correction, which yielded poor accuracy on the test anyway and focused on their limited time on understanding the meaning of the sentence. We invented this approach in Jan 2010, a full 18 months before Stacey Koprince (Manhattan Prep) announced the importance of Meaning in GMAT Sentence Correction. Since 2010, we have iterated these approaches. These iterations paid huge dividends when, in 2018, the GMAC revamped the format of the test, focusing extensively on the meaning and structure of Sentence Correction problems, rendering short-cut tricks ineffective on the new GMAT.

Then, the team developed the often imitated – yet never replicated – approach to solving Critical Reasoning problems: “Pre-thinking.” Owing to the incredibly high problem-solving accuracy it helps you achieve; this technique has become the go-to technique to solve CR problems by test-takers worldwide. The most recent technical innovation, the “Six Process Skills,” helps test-takers solve Quant problems – no matter how challenging – on their way to achieving a perfect Q51. These innovative techniques act as great equalizers; they ensure that “diligence,” not “innate talent,” is the secret sauce required to crush the test and have been refined several times over the years to adapt to the ever-changing nature of the GMAT.

Acing the GMAT requires a data-driven, hyper-personalized approach for each student. Our team realized this and optimized the learning platform with AI that maximizes score gains. Using curated diagnostics, our xPERT AI maximizes efficiency by ensuring that students spend time mastering relevant content, avoiding content they already know. It enables the students to constantly calibrate their performance and adapt accordingly. Similarly, while practicing, it compares each student’s quiz attempts to millions of attempts made by other students to evaluate whether these results are a true representation of ability.

However, on a test as strategic as the GMAT, developing a solid conceptual understanding is not enough – test-takers need to execute it in high-pressure situations. The team sensed the need for a platform to recreate a high-pressure exam-like situation and so developed the wildly popular products, “Scholaranium” and “SIGma-X Mocks“; these platforms offered ESR-like analyses to help test-takers pinpoint their weaknesses and develop highly personalized prep strategies.

Finally, to adapt the GMAT prep journey to the test taker’s unique skill-set, the team launched “Personalized Study Plans,” a free AI-driven planning tool that estimates the total effort required to reach the test-taker’s desired goal and suggests relevant content to study based on the test taker’s specific weaknesses. This was in stark contrast to the “one-size-fits-all” 3-month and 6-month study plans recommended by competitors and helped e-GMATers crush the GMAT in 40% less time.

As e-GMAT acquired a global alumni base – with students from 55 countries – it was important to build for a variety of consumer preferences. During its most explosive growth phase, e-GMAT received two persistent criticisms: a lack of quality customer support and an under-developed Quant product. It was important to adapt and deliver products and services that exceeded expectations in sustaining the rapid growth.

e-GMAT responded by expanding the size of its customer support team by three times. New senior leadership was appointed for the “subject-matter” and “customer success” teams, with both leaders, tasked with implementing systems to measure, track, and improve customer satisfaction. Both teams worked diligently to reduce the response time for student communication from 24 hours to under 8 hours and for subject-matter queries from 2 days to 18 hours. Teams also tracked customer satisfaction (CSAT) scores, working hard to deliver not just timely support but the best, most helpful support in the industry.

Not content with simply meeting customer expectations, the teams innovated and launched first-of-its-kind programs “Last Mile Push” and “Last Mile Touch” to exceed these expectations. These programs have helped test-takers achieve truly elite, 760+ scores, producing 80+ GMAT successes every month. (This is quite evident in the e-GMAT reviews published on the GMAT Club)

As e-GMAT re-defined GMAT prep with its many innovations and achieved its initial goal – to help diligent students ace the GMAT – the team adopted a new goal: to create a platform that is more personalized, more engaging, and more interactive than a private tutor. In pursuit of this goal, the teams at e-GMAT are working on integrating enhanced gamification with the platform, delivering timely feedback to help students pre-empt and avoid pitfalls, and increasing human interaction by introducing personalized live sessions.

Ten years after the company was founded, the passion for helping young professionals realize their MBA dreams has only intensified. The team is committed to developing first-of-its-kind innovations to help every member of the e-GMAT community achieve their MBA dream. We’re working hard to achieve this goal.

If you have questions you would like to discuss, write to Rajat directly at rajat@e-gmat.com!

Try out our free trial that gives you access to more than 400 questions, more than seven webinars conducted by top instructors on GMAT Club, and one free mock test? We are the most reviewed online GMAT Prep company with 2200+ reviews on GMATClub.